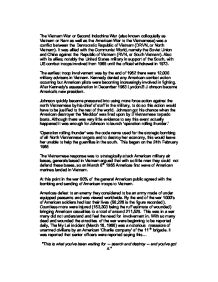 The Vietnam War or Second Indochina War (also known colloquially as Vietnam or Nam as well as the American War to the Vietnamese) was a conflict between the Democratic Republic of Vietnam (DRVN, or North Vietnam). It was allied with the Communist World, namely the Soviet Union and China against the Republic of Vietnam (RVN, or South Vietnam). Also with its allies; notably the United States military in support of the South, with US combat troops involved from 1965 until the official withdrawal in 1973. The earliest troop involvement was by the end of 1962 there were 12,000 military advisers in Vietnam. Kennedy denied any American combat action occurring but American pilots were becoming increasingly involved in fighting. After Kennedy's assassination in December 1963 Lyndon.B Johnson became America's new president. Johnson quickly became pressured into using more force action against the north Vietnamese by his chief of staff in the military, to do so this action would have to be justified to the rest of the world. Johnson got his chance when the American destroyer the 'Maddox' was fired upon by 3 Vietnamese torpedo boats. ...read more.

The photos taken by war journalists were published. These shocking photos made even those who believed in the war slightly unsure, back home this took its toll on an already divided America. America struggled to maintain support for the war at home and on the battlefield, the average age of an American G.I serving in Vietnam was 19. Soldiers as young as this were witnessing friends being killed. They were facing the constant dangers of ambushes, booby traps such as Bouncing Betty's and pits filled with sharpened bamboo spikes. Living conditions in general with the intense heat, mosquito's carrying malaria and the dense terrain meant that life as a soldier serving in Vietnam was a harrowing experience. Many dealt with incompetent officers who generally did more harm than good. All this made soldiers rebel against being there and began to question the motives of the war. The Vietnam War also came as a new type of warfare to the Americans. They were fighting guerilla tactics... "The enemy advances, we retreat; the enemy camps, we harass; the enemy tires, we attack; the enemy retreats, we pursue." ...read more.

The Americans also had to win over the civilians in Vietnam. However the killing of American soldiers was rising and there were no soldiers to retaliate against them. When the enemy retreated to avoid casualties it led to American aggression taken out on the villagers. Also the ability to hide amongst local villages undetected meant the V.C would be feed and hidden etc. There was little way of distinguishing between V.C and peasants, this meant that when American platoons arrived at villages they extract they're revenge on the civilians, burning homes, destroying rice and killing live stock. In the long run this turned the villagers and many changed from opposing the Americans to actual resistance. They actively helped hide V.C or in some extreme cases took up arms with the V.C to fight the Americans. The villagers hiding the V.C meant extra work hands as the V.C when not fighting the Americans had to fit in as to go unnoticed. Given this situation, it is not surprising that the peasants saw the V.C as their friends and the US as the enemy. ...read more.