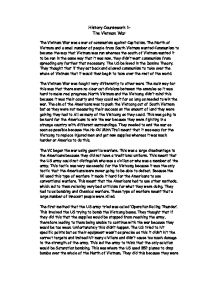 The Vietnam War was a war of communism against Capitalism. The North of Vietnam and a small number of people from South Vietnam wanted Communism to become the way that Vietnam was run whereas the south of Vietnam

History Coursework 1- The Vietnam War The Vietnam War was a war of communism against Capitalism. The North of Vietnam and a small number of people from South Vietnam wanted Communism to become the way that Vietnam was run whereas the south of Vietnam wanted it to be ran in the same way that it was now, they didn't want communism from spreading any further that necessary. The US believed in the Domino Theory. They thought that if they sat back and allowed communism to take over the whole of Vietnam that it would then begin to take over the rest of the world. The Vietnam War was fought very differently to other wars. The main way for this was that there were no clear cut divisions between the enemies so it was hard to make real progress. North Vietnam and the Vietcong didn't mind this because it was their county and they could wait for as long as needed to win the war. The aim of the Americans was to push the Vietcong out of South Vietnam but as they were not measuring their success on the amount of land they were gaining they had to kill as many of the Vietcong as they could. ...read more.

Violence and torture became a common occurrence during the missions and it was often that the innocent civilians became the victims of the hunts. The US used this in response to the Vietcong's use of Guerrilla Warfare. If the VC were in their own clothes the only way that they were able to kill then would be to kill a large number of people. One of the main Search and Destroy missions was My Lai, which later became infamous and received massive criticism from the US media. The US army believed that the village of My Lai was filled with VC and so they invaded. The whole of the village was destroyed with the population being massacred. The US soldiers got the criticism although it was the generals who ordered the soldiers to do what they did. The soldiers were ordered to kill every person who was in the village, man woman or child whether they believed that they belonged to the VC or not. It was assumed that many f the villagers were communist. There were other factors that led to this massacre including the US soldiers wanting revenge for the death of friends in previous battles. ...read more.

The reason for this was that the army was saying that they were closer to winning the war but the only thing that was being reported was that they were causing devastation in Vietnam and if this was the case they were not winning the war in the correct way. This was the major event that led to Vietnamization, the withdrawal of the USA from the war. America said that the South Vietnamese army could continue with the war with the aid of weapons from the US but there would be no US soldiers partaking in the war. The Vietnamization was the choice of President Nixon. He made his decision because of 2 reasons. He knew that the US was not going to win the war after the reaction of the Vietcong in the Tet Offensive. There was a large anti-war movement and he didn't want to lose the support of the people in the US. Vietnamization had an affect on the way that the soldiers fought. None of them wanted to be the last left in Vietnam as they wee being removed. Many of the soldiers gave up fighting because they didn't see why they should have to die for a lost cause and if it had no effect on their country. ...read more.