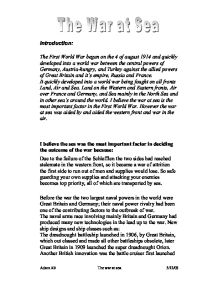 The War at Sea.

Introduction: The First World War began on the 4 of august 1914 and quickly developed into a world war between the central powers of Germany, Austria-hungry, and Turkey against the allied powers of Great Britain and it's empire, Russia and France. It quickly developed into a world war being fought on all fronts Land, Air and Sea. Land on the Western and Eastern fronts, Air over France and Germany, and Sea mainly in the North Sea and in other sea's around the world. I believe the war at sea is the most important factor in the First World War. However the war at sea was aided by and aided the western front and war in the air. I believe the sea was the most important factor in deciding the outcome of the war because: Due to the failure of the Schlefflen the two sides had reached stalemate in the western front, so it became a war of attrition the first side to run out of men and supplies would lose. So safe guarding your own supplies and attacking your enemies becomes top priority, all of which are transported by sea. ...read more.

The British laid declared mine fields across the English Channel and between the Orkney Islands and Norway to limit German U-boat activity outside the north sea and destroy enemy firepower. The Germans laid declared mine fields to protect their coasts and block entrance to the Baltic. U-boats (underwater boats) were the most serious threat to British shipping by the German navy. U-boats carried torpedoes (underwater missiles) they were small submergible craft which relied on stealth and surprise to sink larger warships and merchant ship convoys. They did recognise the rules of war, that civilians should not be killed by military personal. They sank merchant ships instead of trying to capture them, as the U-boats contained only a skeleton crew incapable of capturing merchant ships, and if they revealed themselves and took damage they might not be able to submerge condemning them to a watery death. So in 1915 the German government announced an unrestricted U-boat campaign, declaring that all ships around the British Isles would be sunk, this discouraged other countries from trading with Britain. ...read more.

The battle of Jutland on the 31st may 1916 in the North Sea was the biggest naval battle in the war and last. German and British scout squadrons came in to contact and both were enforced by their main fleets. The British and Germans both claim to have won the British lost more ships but the Germans lost more of a higher class. The outcome of this battle was significant, as the German fleet never again challenged the British fleet. Conclusion: The Sea was the most important as the blockade by British ships was what eventually led to the German surrender in 1918 as the civilian population and military could no operate with out needed supplies form abroad. The Sea was aided by technologies in the air such as reconnaissance planes to spot enemy ships and convoys. The Sea greatly influenced the western front as the British fleet defended and kept open British supply routes, allowing supplies and men to reach the front. While blocking German supply lines preventing supplies from reaching the German front. Naval domination was vital to Britain's war efforts, as it protected Britons island status and kept open the routes of trade between the empire that Britain depended on. Adam Ali The war at sea 5/12/03 ...read more.