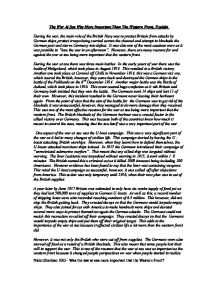 The War At Sea Was More Important Than The Western Front, Explain

The War At Sea Was More Important Than The Western Front, Explain During the war, the main role of the British Navy was to protect Britain from attacks by German ships, protect troops being carried across the channel and attempt to blockade the German post and starve Germany into defeat. It was also one of the most cautious wars as it was possible to "lose the war in an afternoon". However, there are many reasons for and against the war at sea being more important that the western front. During the war at sea there was three main battles. In the early years of war there was the battle of Heligoland, which took place in August 1914. This resulted in a British victory. Another one took place at Coronel off Chilli in November 1914, this was a German victory, which scared the British, however, they came back and destroyed the German ships in the battle of the Falklands on the 8th December 1914. Another major battle was the Battle of Jutland, which took place in 1916. This event caused huge confusion as both Britain and Germany both insisted that they won the battle. The Germans sank 14 ships and lost 11 of their own. ...read more.

The Germans could not match this recreation so called off their campaign. They created decoys so that the Germans would torpedo empty ships and put them off their original target. This adds to the importance of the war at sea because it affected civilian life a lot more than the western front did. However, it was not only the British who were cut off from supplies. The Germans were also starved off food as a result of a British blockade. This also meant that some people lost their will to support the war. This is one of the reasons that the war at sea was as important as the western front because it changed people perspectives on war when people started to realise how bad it was. The British blockade managed to lead to 300,000 deaths caused by malnutrition. Although millions of men were killed on the western front, this is also another reason of why the war at sea is more important that the western front because it shows a success rate and also how far the British navy had come to be able to effect the Germans in that way. Because of the lack of food in Germany, German farmers were forced to kill thousand of animals to feed the population. ...read more.

This shows the similarities between both parts of the WWI even though there was a big difference in its effects and importance. Although the western front lost thousands of lives, the war at sea hit the civilians physically by shortages of food and the need for rationing. This food supply resulted in 300,000 deaths related to malnutrition proving that it affected each civilian personally. It was also very important for both of the countries to have control over the sea because ports, harbours, supplies and empires could be increased. Before the war, Britain had the largest empire, which included ports and control over the sea supported by France. With this in mind, both countries knew what ruling the sea had with it and where eager to do so. Britain especially wanted this because it is surrounded by water, meaning that it would beneficial for them to control it. With this evidence to support that the war at sea was more important that the western front we can see that it is probable. However, we do also know that the Western front was the turning point of the war and contained many important battles. Jutland was one of the most important battles in the war at sea, however, the western front had a lot more than that including the battles of Verdun and the battle of the Somme. Nicki Sheridan 10G - Was the war at sea more important that the Western Front? ...read more.