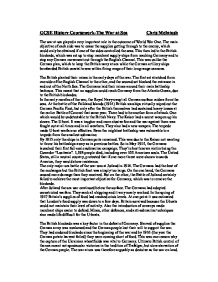 The War at Sea

GCSE History Coursework-The War at Sea Chris McIntosh The war at sea played a very important role in the outcome of World War One. The main objective of each side was to cease the supplies getting through to the enemy, which could only be obtained if one of the sides controlled the seas. This then led to the British blockade, which was set up to stop merchant supply ships from reaching Germany and to stop any German movement out through the English Channel. This was unlike the German plan, which to keep the British navy at sea while the German artillery ships bombarded British coastal towns within firing range of their long range cannons. ...read more.

The Kaiser had a secret weapon up his sleeve. The U-boat. It was a tougher and more elusive foe and the war against them was fought out at all times and in all weathers. They also had a new weapon. The torpedo made U-boat warfare so effective. Even the mightiest battleship was vulnerable to a torpedo from the smallest submarine. By 1915 only the ships in German ports remained. This was due to the Kaiser not wanting to throw his battleships away as in previous battles. So in May 1915, the Germans launched their first full-scale submarine campaign. They're best known victim being the Cunarder "Lusitania". 1,198 people died, including over 100 American souls. ...read more.

Also the introduction of convoys made merchant ships easier to defend. Mines, other defences, and anti-submarine techniques also made life difficult for the U-boats. The British blockade was a key factor in the defeat of Germany. Starved of supplies the German army was weakened and the German people lost their will to support the war. They had endured blockade since the beginning of the war and by 1916 (the year the German potato harvest failed) they were running short of food. This was one reason why the capture of the Ukrainian wheatfields was vital to Germany. Ultimate British control of the sea meant not spectacular victories in the tradition of Trafalgar, but slow starvation of the German people. The war at sea was therefore arguably as decisive as the war on land. In addition, the U-boats' tactics also brought the USA into the war. As in other areas, the Germans gambled...and lost. ...read more.