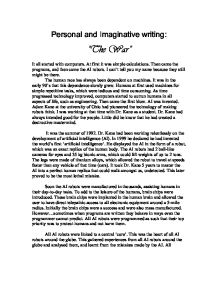 &quot;The War&quot; It all started with computers. At first it was simple calculations. Then came the programs, and then came the AI robots. I can't tell you my name because they still might be there.

Personal and Imaginative writing: "The War" It all started with computers. At first it was simple calculations. Then came the programs, and then came the AI robots. I can't tell you my name because they still might be there. The human race has always been dependent on machines. It was in the early 90's that this dependence slowly grew. Humans at first used machines for simple repetitive tasks, which were tedious and time consuming. As time progressed technology improved, computers started to outrun humans in all aspects of life, such as engineering. Then came the first blow. AI was invented. Adam Kane at the university of Ohio had pioneered the technology of making robots think. I was working at that time with Dr. Kane as a student. Dr. Kane had always intended good for the people. Little did he know that he had created a destructive mastermind. It was the summer of 1992. Dr. Kane had been working relentlessly on the development of artificial intelligence (AI). In 1999 he declared he had invented the world's first 'artificial intelligence'. He displayed the AI in the form of a robot, which was an exact replica of the human body. The AI robots had 2 ball-like cameras for eyes and 35 kg bionic arms, which could lift weights of up to 2 tons. The legs were made of titanium alloys, which allowed the robot to travel at speeds faster than any vehicle of that time (cars). ...read more.

At first these machines started killing stealthily, to avoid human suspicion, since they knew that humans controlled the power supply of the main core. I had seen Dr. Kane work on this whole project. He knew that there was a chance that the machines might choose to disobey humans. He explained it to me that if the machines began domination over the world we could disconnect the main core form its power supply which came from the nuclear power plant in Chernobyl. This would reset all the AI robots rendering them immobile and thus useless. Little did we know at that time that the core was developing its own, more efficient energy source. The core had come to the conclusion that the human race would survive only till energy sources were available. It had also acknowledged that once the humans realized that they were being driven to extinction they would try to shutdown the central core. The energy source developed by the core depended on the earth's heat and the body heat of humans as an energy source. The core started transmitting orders for the AI robots to start 'harvesting humans'. Humans were born artificially and lived only to provide energy for the machines until they were 'chemically dead' and recycled for use again. These 'artificial humans' were actually humans born without parents and were under the control of the core because of the brain chips. ...read more.

This news brought mixed reactions from people. Some complained that the radiation would kill all living animals on the planet. Others were glad that they would finally see the sun and would once again feel the wind blowing through their hair. The radiation eventually dissipated and new plant life start to appear. We waited impatiently until the time finally came when we had to depart from our shelter. I was in the first ship that went towards the surface of the earth. The moment when I saw the sun and felt it's heat, I felt that all the pain we had endured through the years had melted away into the clear blue sky. The humans under the control of the core were free though most of them were dead because of the radiation. We started our calendar again from year '0000' partly because we didn't know what year it was and partly to mark the beginning of a new era for humans. Gradually life returned to normal, measures were taken to combat such a threat if ever such a threat returns, but there were reports that large numbers of AI robots had fled into space taking pieces of the central core with them. Dr. Kane had unintentionally put the human race at risk, but his machines had taught us one thing that the human race should never let machines think. If ever again they would come, we would be prepared. ...read more.