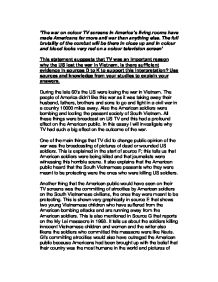 The war on colour TV screens in America&amp;#146;s living rooms have made Americans far more anti war than anything else. The full brutality of the combat will be there in close up and in colour and blood looks very red on a colour television screen

'The war on colour TV screens in America's living rooms have made Americans far more anti war than anything else. The full brutality of the combat will be there in close up and in colour and blood looks very red on a colour television screen' This statement suggests that TV was an important reason why the US lost the war in Vietnam, Is there sufficient evidence in sources D to K to support this interpretation? Use sources and knowledge from your studies to explain your answers. During the late 60's the US were losing the war in Vietnam. The people of America didn't like this war as it was taking away their husband, fathers, brothers and sons to go and fight in a civil war in a country 10000 miles away. Also the American soldiers were bombing and looting the peasant society of South Vietnam. ...read more.

This is also mentioned in Source G that reports on the My Lai massacre in 1968. It tells us about the soldiers killing innocent Vietnamese children and women and the writer also likens the soldiers who committed this massacre were like Nazis. GI's committing atrocities would also have outraged the American public because Americans had been brought up with the belief that their country was the most humane in the world and pictures of GI's and bombs killing innocent Vietnamese would have prompted the US public into opposing the war. The third thing that the American public would have seen on their TV screens was opposition to the war in their own country. This came in a number of forms. One of these was student demonstrators and the Hippie movement and is shown in Source J. This source shows demonstrations at Kent State University and it was at this demonstration that the National Guard killed four demonstrators. ...read more.

This would have had a massive effect on the views of the American public because the people had been used to seeing American GI's beating their opponents and the images of dead and wounded GI's would have prompted the people to speak out against the war. On the other hand TV was used to broadcast government propaganda, saying that the US were actually winning the war and it was more important to stop the communists than to save lives. It also denied the anti-war propaganda by implying that it was just a load of drug taking hippies who didn't want to work. However this use of propaganda by the government could have made the people confused and so led them to distrust the government. Overall these reasons and the effect of the government confusing the public would have led public opinion to swing away from the war and this would have led the government to seek to negotiate with the North Vietnamese because of the fear of not being re-elected. ...read more.