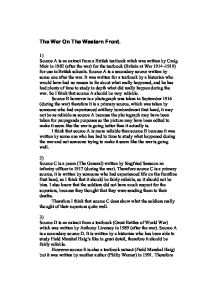 The War On The Western Front.

The War On The Western Front. 1) Source A is an extract from a British textbook witch was written by Craig Mair in 1982 (after the war) for the textbook (Britain at War 1914-1919) for use in British schools. Source A is a secondary source written by some one after the war. It was written for a textbook by a historian who would have had no reason to lie about what really happened, and he has had plenty of time to study in depth what did really happen during the war. So I think that source A should be very reliable. Source B however is a photograph was taken in September 1916 (during the war) therefore it is a primary source, which was taken by someone who had experienced artillery bombardment first hand, it may not be as reliable as source A because the photograph may have been taken for propaganda purposes so the picture may have been edited to make it seem like the war is going better than it actually is. I think that source A is more reliable than source B because it was written by some one who has had to time to study what happened during the war and not someone trying to make it seem like the war is going well. ...read more.

With the commander sticking his head up out of the trench and offering the soldiers a cigarette. Where as in reality if the commander had stuck his head up it would have been shot of by an enemy sniper immediately. And the soldiers would not be standing around do nothings they would have been fighting for there lives up to there knees in mud. And would have had no time at all for a cigarette. I think this advertisement was produced to help sell more cigarettes and also to give the impression to the general public back in England (because they were not allowed to show what was really happening due to censorship) that the war is going well. 5) Source A is an extract from a British textbook (Britain at War 1914-1919) it was written by Craig Mair in 1982 (after the war). It is a secondary source. Therefore it is fairly reliable because it has been written by a historian who probably has carried out some in depth studies into the war. So this source is very useful when studying why the war lasted so long, because it is reliable and contains relevant information. Source B is a photograph taken in 1916 (during the war) by someone who had experienced artillery bombardment firsthand and would know a great deal about, it so it is a primary source. ...read more.

And would have had no time at all for a cigarette. The advert was produced to help sell more cigarettes and to reassure the general public that the war is going well, the cigarette company had to do this because of censor they could not show what was really happening in the trenches. Even though this source is inaccurate it is still useful when studying why the war went o for so long because it shows how censorship was used. Source G shows what Tom Broach who had fought in the war, remembers about trench warfare. It is a primary source written by someone who would have reason to lie therefore I think it is very reliable. So I think that this source would be very useful to someone trying to find out why the war lasted so long, because it gives a good interpretation of what trench warfare was really like and shows how hard life really was for the soldiers on the frontline. All the sources which I have study are useful when trying to find out why the First World War lasted so long, even the unreliable and inaccurate sources are still useful, because they provide proof of things like propaganda and censorship, which both contributed to the war lasting so long. Even if they don't show you what the actually war was like. ...read more.