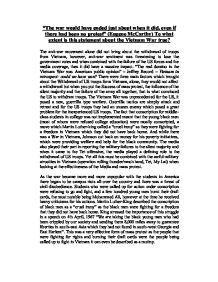 &quot;The war would have ended just about when it did, even if there had been no protest&quot; (Eugene McCarthy) To what extent is this statement about the Vietnam War true?

"The war would have ended just about when it did, even if there had been no protest" (Eugene McCarthy) To what extent is this statement about the Vietnam War true? The anti-war movement alone did not bring about the withdrawal of troops from Vietnam, however, anti-war sentiment was threatening to lose the government votes and when combined with the failure of the US forces and the media coverage, then it did have a massive impact. "The real domino in the Vietnam War was American public opinion" - Jeffrey Record - Vietnam in retrospect: could we have won? There were three main factors which brought about the Withdrawal of US troops form Vietnam, alone, they would not affect a withdrawal but when you put the Success of mass protest, the influence of the silent majority and the failure of the army all together, that is what convinced the US to withdraw troops. The Vietnam War was unprecedented for the US, it posed a new, guerrilla type warfare. Guerrilla tactics are simply attack and retreat and for the US troops they had an unseen enemy which posed a great problem for the inexperienced US troops. The fact that conscription for middle-class students in college was not implemented meant that the young black men (most of whom were refused college education) were mostly conscripted, a move which Martin Luther-king called a "cruel irony" as they were fighting for a freedom in Vietnam which they did not have back home. ...read more.

The media were accused by General Maxwell of being "unpatriotic" and of "helping the enemy", nevertheless this didn't deter them, they had the power to report every offensive and every operation the way they wanted. But it wasn't the media that government were worried about, it was the so-called 'arm-chair generals' who could decide not to vote for the party in power at the next election. They could definitely be called a silent majority, they didn't protest, they didn't set themselves on fire but they were in the majority and they were able to hold the government accountable by voting them out. Every military victory for the US was a propaganda victory for North Vietnam, especially the Tet offensive when 37,000 out of 70,000 NLF members were killed. Tet was a propaganda victory for North Vietnam because the media broadcast pictures of charred NLF members burning in the streets of Saigon, which reacted very badly with the people watching in the US. The Tet offensive was one of the most reported events of the Vietnam War, previous to the offensive in 1967, the NLF had been attacking US garrisons to draw the troops out of the cities, then on the Tet New Year in 1968, 70,000 NLF members attacked more than 100 towns and cities. The offensive showed that the NLF had an inexhaustible supply of men and machinery and that is how the media reported it to the US and world-wide. ...read more.

The trail was almost impossible to infiltrate, there were booby traps laid out along the whole trail, which the NLF knew well, but the US had no idea about. The Ho Chi Minh trail demonstrated to the US how organised and efficient the NLF were and it was the Tet Offensive which demonstrated to the Media and the US how much the NLF strived for a Communist victory. The Tet offensive was a major turning point in the War, in 1968 Johnson announced that there would be a slow withdrawal of troops. Previous to the Tet New Year, NLF members had been attacking US garrisons in an attempt to draw them out of the towns and cities in order to defend the garrisons. Then in January 1967, the NLF launched a massive campaign focusing the 70,000 NLF members on attacking the South Vietnam towns and Cities. 37,000 NLF members were killed however this did not matter to the NLF as it showed the media and the troops that they had an inexhaustible supply of men willing to fight and die for the NLF. The whole offensive was absolutely de-moralising for the troops and worrying for the people watching the broadcasts of the offensive. During the early 70's approximately 20,000 troops resorted to drugs like marijuana, cocaine and heroin, which were widely available in South Vietnam, this further illustrated the lowering moral of the troops. Mass protest acted as a catalyst when combined with other factors such as the mass media and its affect on anti-war sentiment. ...read more.