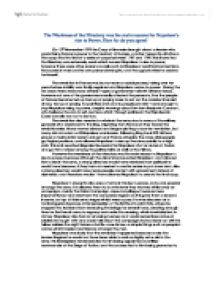 The Weakness of the Directory was the main reasons for Napoleons rise to Power. How far do you agree?

The Weakness of the Directory was the main reasons for Napoleon's rise to Power. How far do you agree? On 10th November 1799 the Coup of Brumaire brought about a leader who would bring France's power to the forefront of Europe, a nation feared by all others. The coup was the final of a series of coups between 1797 and 1799. This shows that the Directory was extremely weak which caused Napoleon to rise to power, however there were other reasons as well, such as Napoleon's political connections, his success in wars and his own personal strengths, and the opportunities he creates for himself. The revolution in France was by no means a quick process, taking over ten years before stability was finally regained and Napoleon came to power. During the ten years there were many different types of government all with different ideas, however not one of the governments really affected the peasants, thus the people of France became fed up. Fed up of paying taxes to sort out the massive financial chaos, fed up of paying for pointless wars and so people just didn't care enough to stop Napoleon rising to power, despite warnings about him from Benjamin Constant, who believed he was to self-centred, which through policies in the Napoleonic Code actually turn out to be true. The revolution also created a whole in the army due to many of the military generals who were loyal to the king, migrating from France as they feared the revolutionaries. ...read more.

His Robespierre tendencies led to him being appointed as artillery commander at the Siege of Toulon, and the success led to him being promoted to Brigadier General. Then the Thermidorian Reaction happened and Napoleon was no longer a general, but after that collapsed, Barras and the Convention called on his aid to put down rebels at the Tuileries Palace. Not only was this good as Napoleon was recognised by an executive Director, expanding his political contacts, but also got him the position of leading the army of Italy, where he really gets known by the political elite and France as a success. This was significant in Napoleon's rise to power as he proved himself a good general of the army, and therefore essential to Sieyes and Ducos' plans for revolution however a strong directory wouldn't have needed a revolution so the weakness of the Directory was the main reason for Napoleon's rise to power. Napoleon also had to rely on his political allies in order to rise to power. The two main plotters were Ducos and Siey�s, both in the Council of Five, the main body in the Directory, but who were upset with the situation in France. They needed someone who was popular amongst the army in order to gain support for a military coup, as well as a successful general in the eyes of the public, and as his disasters were in Egypt, no-one really knew about them, and Napoleon fitted this position, however he was third choice after two other generals had rejected the position. ...read more.

The poor finances were caused by the wars that the revolutionary governments had been fighting, and they continued through the directory until Napoleon ended them in 1802. People saw this as a waste of money and people, especially when the Jourdan Law introduced conscription which made people resent the government. The set up of the Directory also caused upset because to participate in politics it took money, just to vote cost roughly 150-200 days of taxes, restricting political participation to 30,000 people, causing more disinterest in politics. The Directory also failed to deal with the problem of opposition. The royalists still wanted a Bourbon restoration, and the Jacobins and Sans-Culottes were also causing problems. In the end Napoleon is able to rise to power because although he was associated with the Jacobins, he didn't cause upset among the other groups so he is able to rise to power without a large group against him. The weakness of the Directory was the main cause in Napoleon's rise to power as it upsets almost everyone; even those involved in the Directory like Sieyes and Ducos, and also created political apathy which means Napoleon's rise to power faced no opposition from the public. However Napoleon's popularity among the army was crucial in him being selected by the original conspirators, and the politicisation of the army, another problem caused by a weak directory, allowed him to be known by the political elite. ...read more.

This is a very strong response that has a consistent argument running through it and remains focused on the question throughout. It is always best to deal with the stated factor first but the author demonstrates excellent understanding of the reasons for Napoleon's rise. 5 out of 5 stars.