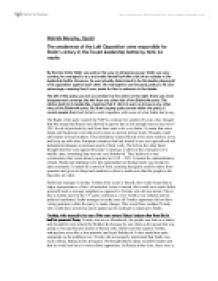 The weaknesses of the Left Opposition were responsible for Stalins victory in the Soviet leadership battle by 1929. Discuss.

Patrick Murphy, 12ps33 The weaknesses of the Left Opposition were responsible for Stalin's victory in the Soviet leadership battle by 1929. 24 marks By the late 1920s Stalin was well on the way to achieving power. Stalin was very cunning, he managed to try and make himself look like a bit of an outsider in the leadership battle. However, he was actually determined to be the leader playing all of his opposition against each other. He managed to use the party policy to his own advantage, meaning that it was easier for him to advance to the leader. The left of the party was not as consistent as the centre or the right, there was more disagreements amongst the left than any other side of the Bolshevik party. This relates back to its leadership, meaning that it did not seem as strong as any other wing of the Bolshevik party. By Stalin staying quite central within the party, it meant people from both beliefs could empathise with some of what Stalin had to say. The Right of the party wanted the NEP to continue for another 20 years, they thought that this meant the Russia was allowed to grown into a rich enough state to recover to 1913 levels of productivity and from there start to do even better. ...read more.

It also made him quite unpopular on the politburo too. Trotsky did not properly understand that Stalin was such a threat, linking to his arrogance. He thought that he alone would be leader and that he would not have to worry about opposition. In Russia at this time, there were a lot of anti-Jewish feelings by the public. They were not ready to see a Jewish leader. This made him unpopular on the politburo, having the support of the politburo would really assist him in the leadership battle, but seeing as though Stalin had more support from within the politburo this is a significant reason why. He failed to understand that in order to launch an attack a power base is essential and Trotsky failed to build one - even after Lenin's suggestion in December 1922 that they build a 'bloc against bureaucratism in general and the Orgburo in particular'. Trotsky's attack on Kamenev and Zinoviev in 1924 in his Lessons of October convinced them of their need to fear him and made an alliance with Stalin more likely. Zinoviev and Kamenev attacked Trotsky's authority; Stalin refused to get involved in the heated debates and therefore kept his reputation intact. ...read more.

Bukharin stood no chance against someone of Stalin's ability - especially when he was so pro-peasant. Stalin raised concerns over his thought and managed to get Bukharin kicked out of the central committee in 1929. In conclusion, I would say that although the failure of the Left opposition is not the sole reason for Stalin's success it was a very major factor to put into consideration. It was Stalin that made sure that it was not successful; he did not allow Trotsky supporters voting roles, meaning more people would be likely to support him. He managed to use concerns about the left / right to get opposition kicked out of the central committee and the politburo. A lot had to do with the personal weaknesses of the individuals too, Trotsky did not realise that Stalin was actually an untrustworthy enemy due to his arrogance and self-confidence. Zinoviev and Kamenev did not recognise that Stalin was so important. However, the most important reason is that Stalin had better political power and he could apply this better. Lenin's legacy the he left Stalin behind helped him gain victory too. He could use his power from the central committee and the politburo to make necessary allegiances. Trotsky did not have the party power that Stalin did to make such moves. The other opposition were ultimately too naive to the plans Stalin had in mind. ...read more.