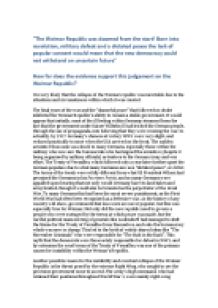 ﻿?The Weimar Republic was doomed from the start! Born into revolution, military defeat and a dictated peace the lack of popular consent would mean that the new democracy could not withstand an uncertain future? How far does the evidence support this judgement on the Weimar Republic? It is very likely that the collapse of the Weimar republic was inevitable due to the situations and circumstances within which it was created. The final years of the war and the ?shameful peace? that followed no doubt inhibited the Weimar Republic?s ability to remain a stable government. It would appear that initially, most of the ill feeling within Germany stemmed from the fact that the government under Kaiser Wilhelm II had tricked the German people, through the use of propaganda, into believing that they were winning the war. In actuality, by 1917 Germany?s chances at victory WW1 were very slight, and reduced practically to none when the USA arrived on the front. The sudden armistice thus came as a shock to many Germans, especially those within the military who now saw the bureaucrats who had signed the armistice (despite it being organised by military officials) as traitors to the German Army and war effort. The Treaty of Versailles, which followed only a year later further upset the German populace due to what many Germans saw as a ?dictated peace?, or diktat. ...read more.

Further danger from right-wing extremists can be seen in both the Kapp Putsch and the Beer Hall Putsch of 1920 and 1923 respectively. Both of these attempts to abolish the Weimar Republic ultimately failed, but are evidence nonetheless of the power that right-wing parties possessed, and the threat they posed to the sanctity of the Weimar Republic. Worse yet, the Weimar Republic would receive no support from the far-left either, with left-wing extremist movements and parties often as rebellious as their right-wing counterparts. In 1919, the communist KPD party joined the Spartacist Uprising in Berlin, with Rosa Luxemburg and Karl Liebknecht at its helm. Even after the Freikorps put down the revolt, the KPD remained as a figure in German politics, wanting nothing less than the destruction of the current regime, and the creation of a communist German state. This meant that there was no chance of cooperation between the moderate SPD and the somewhat successful KPD who enjoyed a 10-15% of the electorate. Though the danger that the left posed wasn?t limited to the initial revolt, nor their presence in the Reichstag. In 1920 the Army of the Ruhr rose up against to combat the Kapp Putsch, then a year later Merseburg and Halle were the location of a series of strikes led by the KPD, concluding with the creation of a temporary KPD government in 1923. ...read more.

While created so that the government could still operate in a crisis, and stamp out rebellions, it would be abused in 1933, during Hitler?s ?legal revolution?, which can be cited as the beginning of the Third Reich. The final way in which Weimar was weakened by its own constitution was in how it allowed traditional institutions to continue. One example of this can be seen in the judiciary system, who still maintained a degree of independence from the Weimar Republic, despite many Judges being anti-democracy and right-wing. As a result, there was extreme bias in the Supreme Court against left-wing individuals, which led to situations where left-wing extremists were given far harsher punishments than right-wing extremists who were charged with similar or identical crimes. The evidence does suggest that the Weimar Republic was, as the title states, ?doomed to fail?. Due to existing anti-democracy feelings in the judiciary system and the army, Weimar was limited in how it could protect itself and fairly process enemies of the state, meaning that the authority of the government was severely limited. The sentiment the people carried towards the Republic did not make the situation any better for the fledgling government, whose own constitution also hindered any chance of maintaining long-term stability. Weimar was without a doubt doomed to fail, though certain aspects that are often cited for its downfall, such as the threat from the right, may be exaggerated. Nevertheless, it remains clear that the situation in which it was established prevented it from ever being a long-term government in the politically chaotic Germany. ...read more.