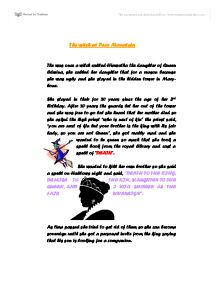 The witch at Peco Mountain

The witch at Peco Mountain The was once a witch called Hiawatha the daughter of Queen Edwina, she called her daughter that for a reason because she was ugly and she stayed in the hidden tower in Mary-bone. She stayed in their for 20 years since the age of her 3rd birthday. After 20 years the guards let her out of the tower and she was free to go but she heard that her mother died so she asked the high priest "who is next of kin" the priest said, "you are next of kin but your brother is the king with his fair lady, so you are not Queen", she got really mad and she wanted to be queen so much that she took a spell book from the royal library and cast a spell of 'DEATH'. She wanted to kill her own brother so she said a spell on Hallows night and said, "DEATH TO THE KING, DEMISE TO THE KIN, SLAUGHTER TO THE QUEEN, AND I WILL SHOWER AS THE FAIR SOVEREIGN". ...read more.

up to her and asked, "do you want to dance", and she replied, "I don't know how to" and he said, "I will educate you". They went to the shimmering gold floor and she was dancing, she had the best 20 minutes of true pleasure. Then suddenly she was enclosed by men every were and she could not get away from them, quickly someone pulled her away from the nasty men. There stood the grandest man she ever seen, and he was the prince of the royal king and his name was Edward, then they both danced and danced for ages, they went into the royal estate were the flowers were blooming, and he asked, "what is your name fair lady" and she said, "Hiawatha" and he said, "what a unusual name you have", she talked and talked like they knew each other for ages. Then the royal announce went for the prince and he stood up and said come with me, so she went and the prince and her was standing in the middle of the dance floor and he said, "I have chosen my companion" and then suddenly the queen and king came down and said, "you have been chosen as my sons bride". ...read more.

All she could think of when she flew from the kingdom to the house she lived in was that man she met, the few days when she was at the house she was thinking how can I love him he is my nephew and I am his aunt. Three days later she went back to the kingdom and she entered her brothers room and waited until he got back. The doors flew open, and there her brother was and he said, "What are you doing her, my revolting sister?", she then said, "I want to make a deal with you brother, is that your son that nearly announced that we were to get married" and he replied, "no, it is my adopted brother from this elderly and revolting fair lady, and he is older then me as well I thought him in the ways of our family", they talked and talked until the stars came out. They made a deal that his adopted brother will marry her and she will have the right to the thrown and she will turn the people back to normal. The time came for her to see her fianc�, they both stood in the ...read more.