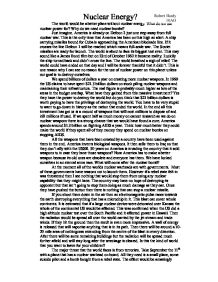 The world would be a better place without nuclear energy. What do we use nuclear power for? Why do we need nuclear bombs?

The world would be a better place without nuclear energy. What do we use nuclear power for? Why do we need nuclear bombs? Just imagine. America is already on Defcon 2 just one step away from full nuclear war. This is the only time that America has been on this high an alert. A ship carrying missiles bound for Cuba is approaching the American blockade line. If it crosses the line Defcon 1 will be reached which means full-scale war. The Soviet missiles are ready for launch. The world is about to face its biggest test ever. This may sound like a James Bond film but on 23rd of October 1962 it became reality. Luckily the ship turned back and didn't cross the line. The world breathed a sigh of relief. The world could have ended on that day and I will be forever thankful that it didn't. This is one reason why I can see no reason for the use of nuclear power on this planet unless our goal is to destroy ourselves. We spend billions of dollars a year on creating more nuclear weapons. In 1999 the US claims to have spent $21.3 billion dollars on stock piling nuclear weapons and maintaining their infrastructure. ...read more.

Then there will be around a 10-20 mile area of nothingness extending from the centre of the blast in every direction. After there will be some remaining buildings but the radiation will be spread much further afield and will stay long after the wreckage is cleared. Is this the kind of world that you want to leave for your children? The major threat that the world faces is from terrorists. Take September the 11th with a plane that has a nuclear warhead on board. All they need is a small plane, some suicide pilot and a bomb bought from a rebel state. The effect would be amazingly devastating. The whole of New York would be completely flattened and the surrounding area radioactive. The richest and most powerful nation on earth crippled by the very technology that it created, reduced to a radioactive wasteland. Cleary the world would be a better place without nuclear weapons. How on earth are we going to achieve this? Well it's fairly simple. Take all of our nuclear weapons and decommission them. It might be argued that we would be an easy target; we have no defence against other nations. ...read more.

We can't just tell everyone where it is because the some terrorist could just dig it up and use it as he pleases. If we keep it secret then we risk losing it and then farming the land that it's buried in. Who wants to eat radioactive food? There is also a high risk of this material giving people who are working with it or just people who live in the area cancer. The government will claim that its only about 1% more than the radiation we get naturally but is any additional amount of radiation safe? The only sensible solution is not to make this waste in the first place. Even though most sane people know that nuclear energy could kill us all we still continue on with our nuclear ambitions. It's as if we have to prove to ourselves, that we aren't scared of this monster that we have created. Instead of being arrogant we should just get around to fixing the problem before it gets any worse. Unless you want to be remembered by future generations as the one that almost ended the world then I suggest that we stop this before we do realise the sum of all fears and this time it won't be on film. Nuclear Energy? ...read more.