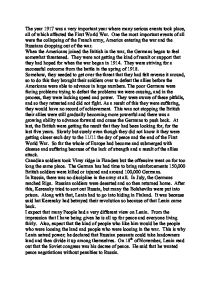 The year 1917 was a very important year where many serious events took place, all of which affected the First World War.

The year 1917 was a very important year where many serious events took place, all of which affected the First World War. One the most important events of all were the collapsing of the French army, America entering the war and the Russians dropping out of the war. When the Americans joined the British in the war, the Germans began to feel somewhat threatened. They were not getting the kind of result or support that they had hoped for when the war began in 1914. They were striving for a successful outcome from the battle in the spring of 1918. Somehow, they needed to get over the threat that they had felt reverse it around, so to do this they brought their soldiers over to defeat the allies before the Americans were able to advance in large numbers. ...read more.

At last, the British were getting the result that they had been looking for, for the last five years. Slowly but surely even though they did not know it they were getting closer each day to the 11/11 the day of peace and the end of the First World War. So far the whole of Europe had become and submerged with disease and suffering because of the lack of strength and a result of the allies attack. Canadian soldiers took Vimy ridge in Flanders but the offensive went on for too long the same place. The German has had time to bring reinforcements 150,000 British soldiers were killed or injured and around 100,000 Germans. ...read more.

From the impression that I have being given he is all up for peace and everyone living fairly. Also, expect that the kind of people who like him would be the people who were loosing the land and people who were loosing in the war. This is why Lenin seized power; he declared that Russian peasants could take landowners land and then divide it up among themselves. On 18th of November, Lenin read out that the Soviet congress was his decree of peace. He said that he wanted peace negotiations without penalties to Russia. Lenin then invited all the great powers to surrender all the land, which they had gained during the war started. He especially wanted England, France, and Germany. The Germans wanted to agree the whole of Russia stopped fighting and the French and the British decided to fight the Bolsheviks and started a whole new war. ...read more.