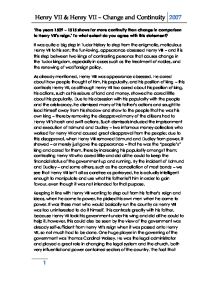 'The years 1509 - 1515 shows far more continuity than change in comparison to Henry VII's reign.' To what extent do you agree with this statement?

'The years 1509 - 1515 shows far more continuity than change in comparison to Henry VII's reign.' To what extent do you agree with this statement? It was quite a big step in Tudor history to step from the enigmatic, meticulous Henry VII to his son; the fun-loving, appearance obsessed Henry VIII - and it is this step between two kings of contrasting personas that causes change in the Tudor kingdom, especially in cases such as the treatment of nobles, and the renewing of war/foreign policy. As already mentioned, Henry VIII was appearance obsessed. He cared about how people thought of him, his popularity, and his position of king - this contrasts Henry VII, as although Henry VII too cared about his position of king, his actions, such as his seizure of land and money, showed he cared little about his popularity. Due to his obsession with his popularity with the people and the aristocracy, he dismissed many of his father's actions and sought to lead himself away from his shadow and show to the people that he was his own king - thereby removing the disapproval many of the citizens had to Henry VII's harsh and swift actions. ...read more.

be a huge blow on the economy and welfare of the state - Henry, however, saw the war as a way to prove that he had the warrior inside of him as well as a statesman, as that was seen as what was needed to hold the position as king. The renewal of the 100 year war with France can be seen as both a change and continuity. First of all, and this is what I believe, the fact that Henry VIII went to war with France through no provocation upon himself or the country during his reign contrasts with Henry VII, as Henry VII did not have any wars outside of securing his own position during his reign - the other view is that Henry VII also used military tactics and waged war at the Battle of Bosworth to secure his position as king, and this can be related with Henry VIII waging war with France, however, the Battle of Bosworth is in its own category, because the events at Bosworth was to secure the throne and establish Henry VII as king, but Henry VIII is already king and has no need for France at all - so a change in wanting what is not needed, Henry VII's greed, and his obsession with securing his appearance is shown through his actions with France. ...read more.

This is a huge change from Henry VII as his avarice was his pride and he was very meticulous and tight with his spending. The war with France also required a lot of money which meant that Henry VIII would be very low in finances and his popularity would decrease slightly. All in all, there doesn't seem to be much continuity in the reign of Henry VIII when compared to Henry VII. There were many dramatic changes such as the treatment of nobles, war and foreign relations, and domestic popularity which showed just how much Henry VIII sought to change his ways from his father. Whether it was for the best of the country is subjective to the thinker, but in the end, both kings wanted the same thing which was to secure their Tudor dynasty, and it is clear that Henry VII did this much better than Henry VIII as there were less wars, no financial problems, and the nobles were kept at bay without expenditure on the king's behalf - which of course shows just how much Henry VII was different to Henry VIII in his reign as king. ?? ?? ?? ?? Henry VII & Henry VII - Change and Continuity 2007 1 ...read more.