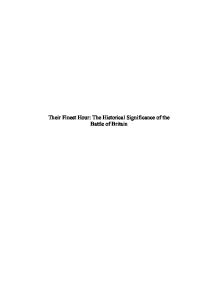 Their Finest Hour - The Historical Significance of the Battle of Britain.

Their Finest Hour: The Historical Significance of the Battle of Britain ". . . if the British Empire and its Commonwealth last for a thousand years, men will still say, "This was their finest hour"."-Winston S. Churchill (in a speech delivered to the House of Commons, 18 June 1940.) The history of the British Isles overflows with significant accomplishments and instances of great bravery. The Magna Carta, the defeat of the Spanish Armada, the Bill of Rights, the Industrial Revolution, Passchendaele, and the Battle of Mirbat, amongst others, represent some of the best moments in the long and proud history of a great nation. None of these events, however, can match, in either importance or bravery, the actions of the people of Britain, both military and civilian, during the Battle of Britain for this episode led to the defeat of perhaps the greatest threat civilization has ever faced and thus guaranteed the survival of the western world. While all of Britain's accomplishments during World War II contributed greatly to the defeat of Nazi Germany it was, undoubtedly, victory in the Battle of Britain which played the central role in overcoming the forces of tyranny and this battle, therefore, ranks as the most significant event in British history. ...read more.

This goal was not accomplished as Air Chief Marshall Sir Hugh Dowding was unwilling to commit his forces under such unfavourable conditions.8 The Germans, however, soon began to intensify their attacks on convoys in the Channel as well as against English ports and Dowding had little choice but to respond. The fighting which took place at this time was intense but worse was yet to come. The next stage of the battle began on 15 August 1940 and involved attacks against aircraft factories, radar installations, and fighter bases which were designed to destroy both the aircraft, as well as the infrastructure, of the Royal Air Force. On the first day of this phase the Luftwaffe employed over a thousand aircraft of which the Royal Air Force shot down 180.9 In the first ten days of this stage of the battle, the Royal Air Force lost 153 aircraft.10 The German Luftwaffe, on the other hand, lost 697 11 during the same period. The Germans intensified their attacks and, unbeknownst to them, came close to destroying the Royal Air Force's ability to fight back. Then, however, came a turning 5 point in history. In response to these repeated attacks Winston Churchill had ordered that the Royal Air Force should launch raids against military targets within Germany. ...read more.

other atrocities committed by the Nazis, that Germany would have resorted to the use of a nuclear bomb, which they would surely have developed, if they ever felt sufficiently threatened during the post war period. The heightened possibility of a nuclear confrontation which would have resulted from a German victory in 1940 is almost as terrifying as the reality of the Holocaust. For these reasons, then, Britain's victory in the Battle of Britain must surely be regarded as the most significant event in the nation's history. This is not to take away from the significance of accomplishments such as the Magna Carta, the defeat of the Spanish Armada, or the Bill of Rights for these were certainly great accomplishments for both Britain as a nation and mankind as a whole but none of these, nor any of the other 8 momentous events of British history, can be said to have ensured the survival of civilization as we know it in the same way as did victory in the Battle of Britain. This victory in the summer and fall of 1940, as well as the possible consequences it prevented, demonstrate the accuracy of Winston Churchill's statement that "Never in the field of human conflict was so much owed by so many to so few. ...read more.