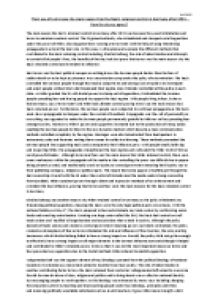 Their use of terror was the main reason that the Nazis retained control in Germany after 1933. How far do you agree?

﻿Jack Pettitt Their use of terror was the main reason that the Nazi?s retained control in Germany after 1933. How far do you agree? The main reason the Nazi?s retained control in Germany after 1933 was because they used intimidation and terror to maintain constant control. The SS gained authority who intimidated and stamped out all opposition under the power of Hitler, showing great force running a terror state with the help of using threatening propaganda to extend the Nazi rule. In this essay I will explain and evaluate the different methods that contributed to the Nazis retaining control including, Gleichschaltung, the role of indoctrination and attempts to control all of people?s lives, the benefits of the Nazi rule but prove that terror was the main reason why the Nazis retained control and extended its influence. Nazi terror was the best political weapon as nothing drove the German people harder than the fear of sudden death or to be kept as prisoners in a concentration camp under the policy of extermination. The Nazis controlled the German people through fear mainly using the SS and Gestapo (secret police) to investigate and arrest people without trial who threatened their regime since Himmler controlled all the police in each state. As Hitler granted the SS with brutal power to stamp out all opposition, it intimidated the German people spreading fear and forcing people to support the Nazi regime. ...read more.

eliminated the role and influence of the churches, the army and big businesses which Gleichschaltung failed to have a strong impact on. Overall, the policy it did not go far enough to effectively have a strong impact on all major elements in the German infrastructure and although it helped and contributed to Hitler?s retained power, it shows that it was not the most important reason as terror and fear prevented any opposition due to the brutal methods Hitler ordered to abolish opposition. Volsgemeinschaft was the vaguest element of Nazi ideology sprouted from the political ideology of National Socialism. It extended as a movement aimed to transform German society. The role of indoctrination is another contributing factor to how the Nazis retained their control as Volksgemeinschaft aimed to overcome the old German divisions of class, religion and politics and to bring about a new collective national identity by encouraging people to work together. As this ideology was enhanced by many ways including changing the education system by teaching and brainwashing people under Nazi ideology, principles and ethos and removing politically unreliable individuals such as Jewish teachers, it gave Hitler more strength which contributed to the reason why the Nazis retained control in Germany. By changing and adapting the curricula and syllabuses to fit in with the Nazi Aryan ideal, Hitler indoctrinated the entire nation into believing Nazi ideology so he would gain more support and power. ...read more.

People were attacked and murdered by the Nazis for being Jewish or for being homosexual and others, such as teachers, lost their jobs if they refused to teach children about Hitler and Nazi ideology. People had their rights including freedom of speech taken away from them and those who spoke against Hitler would be reported on by a network of spies and put into prison by the Gestapo. Overall although some people definitely benefitted from Nazi control, it is clear that people felt under total control of Hitler as they were yet again living in fear due to their freedom of speech being limited. Their brutal regimes and intimidation also explains the reduced unemployment as Jews were fired and replaced with Germans, women were fired and replaced with men and men also had to either join the army or public works schemes. Therefore, terror and fear is the most important reason the Nazis retained control because In conclusion, after assessing all the factors that contributed to their retained control, terror and fear were the most important reasons why the Nazi?s retained control in Germany. Terror was undoubtedly the best political weapon as nothing drove society harder than the fear of sudden death or brutal methods to punish people who threatened Nazi ideology. This was enforced by the SS and the Gestapo, who created an atmosphere of fear, forcing people to support Hitler. Also, their use of clever propaganda techniques indoctrinated the nation into Nazi ideology, also spreading fear amongst any possible opposition. Therefore, terror was the most important reason why the Nazi?s retained control in Germany. ...read more.