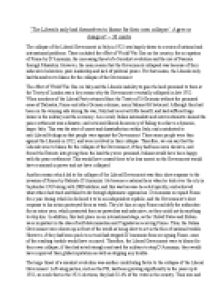 TheItalian Liberals only had themselves to blame for their own collapse in 1922. Agree or disagree?

﻿?The Liberals only had themselves to blame for their own collapse?. Agree or disagree? ? 30 marks The collapse of the Liberal Government in Italy in 1922 was largely down to a series of national and international problems. These included the effect of World War One on the country, the occupation of Fiume by D?Annunzio, the increasing threat of a Socialist revolution and the rise of Fascism through Mussolini. However, the main reason that the Government collapsed was because of their indecisive behaviour, poor leadership and lack of political power. For that reason, the Liberals only had themselves to blame for the collapse of the Government. The effect of World War One on Italy and the Liberals inability to gain the land promised to them at the Treaty of London was a key reason why the Government eventually collapsed in late 1922. When members of the Liberal Party returned from the Treaty of St Germain without the promised areas of Dalmatia, Fiume and other German colonies, many Italians felt betrayed. Although they had been on the winning side during the war, Italy had received little benefit, and had suffered huge losses in the military and the economy. ...read more.

However, if they had been quick to act and had stopped D?Annunzio from occupying Fiume, none of the resulting trouble would have occurred. Therefore, the Liberal Government were to blame for their own collapse; if they had acted strongly and used the military to stop D?Annunzio, they would have improved their global reputation as well as stopping any trouble. The large threat of a socialist revolution was another contributing factor to the collapse of the Liberal Government. Left-wing parties, such as the PSI, had been growing significantly in the years up to 1922, so much that in the 1921 elections, they had 32.4% of the votes in the country. Their size and support was seen during the ?Red Years? in 1920-21, when a wage dispute rapidly escalated into 400,000 workers occupying in factories in northern Italy. The Government should have acted at this time to extinguish the socialist threat, and end the fear of a revolution. However, as they did not, this portrayed them as weak to the Italian people who then lost faith in their Government. Despite the eventual collapse of the revolution, the occupation caused people to view the left-wing as a major threat to their way of life. ...read more.

However, if a stronger response was shown from the Government, the fascists would have been stopped, and not have gone on to seize power. Therefore, the collapse of the Liberal Government was down to their failure to act quickly; if they had been more decisive, they could have stopped the fascist violence earlier on, whilst also realising that Mussolini was only acting to get into the Italian parliament. This would cause them to remain in control of the country, and they would not have collapsed. In conclusion, the statement that the Liberals only had themselves to blame for their own collapse is true to a large extent. If they had responded differently to national problems by being strong and decisive, the people would have been more likely to accept them and not cause trouble. However, there were also a large number of contributing factors which caused the collapse of the Liberal Government; World War One, the occupation of Fiume and the rise of socialism and fascism both contributed to the Liberal?s downfall. Therefore, the collapse of the Liberal Government was their own fault, as they could have remained in power if they had responded to national issues in a more decisive manner. ...read more.