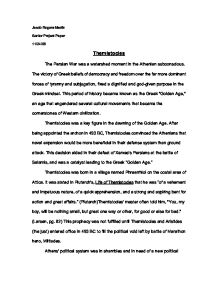 Jacob Rogers-Martin Senior Project Paper 11/24/08 Themistocles The Persian War was a watershed moment in the Athenian subconscious. The victory of Greek beliefs of democracy and freedom over the far more dominant forces of tyranny and subjugation, fixed a dignified and god-given purpose in the Greek mindset. This period of history became known as the Greek "Golden Age," an age that engendered several cultural movements that became the cornerstones of Western civilization. Themistocles was a key figure in the dawning of the Golden Age. After being appointed the archon in 493 BC, Themistocles convinced the Athenians that naval expansion would be more beneficial in their defense system than ground attack. This decision aided in their defeat of Xerxes's Persians at the battle of Salamis, and was a catalyst leading to the Greek "Golden Age." Themistocles was born in a village named Phrearrhioi on the costal area of Attica. It was stated in Plutarch's, Life of Themistocles that he was "of a vehement and impetuous nature, of a quick apprehension, and a strong and aspiring bent for action and great affairs." (Plutarch)Themistocles' master often told him, "You, my boy, will be nothing small, but great one way or other, for good or else for bad." (Larsen, pg. 82) This prophecy was not fulfilled until Themistocles and Aristides (the just) ...read more.

The Persian Empire in 482 BC was angry at Greece for aiding the Ionian's in the revolt against the Persians and engaged in a full scale attempt to conquer Greece. Under the advisement of General Themistocles, the Greeks sailed to the island of Salamis to prevent Persian naval operations against the Peloponnesus, the part of Greece that remained unoccupied. According to Greek historian, Herodotus, there were 180 ships from Athens, 40 from Corinth, 30 from Aegina, 20 from Chalcis, 20 from Megara, 16 from Sparta, 15 from Sicyon, 10 from Epidaurus, 7 from Eretria, 7 from Ambracia, 5 from Troizen, 4 from Naxos, 3 from Leucas, 3 from Hermione, 2 from Styra, 2 from Cythnus, 2 from Ceos, 2 from Melos, one from Siphnus, one from Seriphus, and one from Croton (these numbers are under scrutiny amongst historians) (Hammond Pg. 50). The much larger Persian fleet consisted of 1207 ships, and the empire was at its zenith of confidence. Xerxes's Persian's decided to meet the Athenian fleet off the coast of Salamis Island, and they were so confident of their victory that Xerxes assembled a throne on the shore for him to sit and watch for soldiers that excelled in combat. The Persian naval strategy was to severely outnumber the Greeks and destroy the Allied forces in hopes that the Greeks would surrender. ...read more.

The Persians had an opprobrious reputation for forcefully injecting their culture into conquered lands (this is why the defeat of the Persians at the battle of Salamis is so significant). After Salamis, the Peloponnesus, and later on Greece as an entity was free from Persian conquest; and the Persians suffered a severe morale loss (as well as immense material losses). At the following battles of Plataea and Mycale, the threat of conquest was completely removed, and all the Greek city-states were relieved of subjugation. The new found confidence that dwelled in the minds of the Greeks ignited the "Athenian Golden Age," a cultural flourishing that took place following the Persian War. One could argue that if the Greeks had lost to the Persians, the ensuing conquest would have smothered the growth of modern "western civilization." The legacy of Ancient Greece is rudimentary to much of modern Western society. Greek philosophers engendered the concept of Western thought as well as most Western science. Ideas such as individual freedom and democracy are directly derived from this period, along with Roman law, literature, and European architecture. Considering the strong prevalence of Western civilization in much of modern history, it is not fallacious to assume that Persian domination would have altered the whole consecution of human history. We can give our gratitude to Themistocles for making America and other countries around the world what they are today. ...read more.