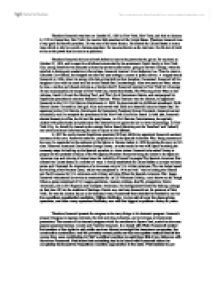 Theodore Roosevelt was born on October 27, 1858 in New York, New York, and died on January 6, 1919 in Oyster Bay, New York. He was the 26th president of the United States. Theodore Roosevelt was a very good and known president. He was one of the most famous. He effected the United States in many ways which is why he is such a famous president. He was also known as the war hero. He did alot of work to rise to the power that he rose to as president. Theodore Roosevelt did alot of work before he rose to the power that he got to. He was born on October 27, 1858, and he spent his childhood surrounded by his aristocratic Dutch family in New York City. young Roosevelt was educated at home by private tutors before going to Harvard College, where he excelled in boxing and academics.After college, Roosevelt married Alice Hathaway Lee. Then he went to Columbia Law School, but dropped out after one year to begin a career in public service. A tragedy struck Roosevelt in 1884, when his young wife died giving birth to their daughter. ...read more.

In New York City, he forcefully cleaned up the corrupt Police Board (throwing out the "boodlers" and "takers") and strictly enforced laws banning the sale of liquor on the Sabbath. In 1897 the newly elected Republican president William McKinley appointed Roosevelt assistant secretary of the navy. Roosevelt made the preparations for the Spanish-American War. Being secretary of the navy, he responded to the explosion of the Maine in Havana harbor in 1898 by putting the navy on full alert. Roosevelt instructed Commodore George Dewey , to make ready for war with Spain by taking the necessary steps for bottling up the Spanish squadron in Asian waters. Roosevelt also asked Dewey to prepare for the probable invasion of the Philippines.Theodore Roosevelt being the leader in the Spanich-American war and winning it helped raise the visibitlity of himself to people.The Spanish-American War affected the United States in a number of ways. It firmly established the United States as a major military power and illustrated the importance of a two-ocean navy to U.S. military planners. ...read more.

In a break with Platt, Roosevelt wanted the taxation of the rights to sell public services Almost overnight the insurance companies, the construction contractors, and the privately owned public service monopolies realized that all the money they were contributing to Platt 's political machine brought them little if any influence with Governor Roosevelt. Platt knew that something had to be done with Roosevelt before he completely destroyed the Republican machine organization in the state. Platt decided to put Roosevelt to vice presidency in 1900. Vice President Garret Hobart had just died in office.This would keep Roosevelt from running for a second term in New York. Roosevelt agreed, persuaded that the vice presidency might lead to a chance at the White House in 1904. In domestic affairs Roosevelt controlled the progressive movement, which tried to stop economic and political that undermined equality of opppertunity. His comitment to racial equlaity led him to invite American educator Booker T. Washington to dinner at the White House in 1901. This was the first time an African American had dinner at the White House. Roosevelts purpose of this was to have people start having social equlaity, the south supported him on this one. Him doing the led to stopping racism just about completly. ...read more.