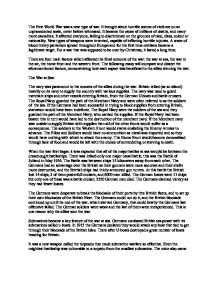 There are four main factors which affected the final outcome of the war: the war at sea, the war in the air, the home front and the western front. The following essay will compare and dissect the aforementioned factors.

The First World War was a new type of war. It brought about horrific scenes of violence on an unprecedented scale, never before witnessed. It became the cause of millions of deaths, and many more casualties. It affected everyone, failing to discriminate on the grounds of race, class, colour or nationality. New types of weapons were invented, capable of inflicting horrific injuries. A wave of blood thirsty patriotism spread throughout Europe and for the first time civilians became a legitimate target. For a war that was supposed to be over by Christmas, it lasted a long time. There are four main factors which affected the final outcome of the war: the war at sea, the war in the air, the home front and the western front. The following essay will compare and dissect the aforementioned factors, demonstrating how each aspect was beneficial to the allies winning the war. The War at Sea: The navy was paramount to the success of the allies during the war. Britain relied (as an island) heavily on its navy to supply the country with various supplies. The navy was used to guard merchant ships and other vessels entering Britain, from the German U-boats and battle cruisers. The Royal Navy guarded the path of the Merchant Navy and were often referred to as the soldiers of the sea. If the Germans had been successful in trying to block supplies from entering Britain, starvation would have been indefinite. The Royal Navy were the soldiers of the sea and they guarded the path of the Merchant Navy, who carried the supplies. If the Royal Navy had been beaten this in turn would have led to the destruction of the merchant navy. If the Merchant navy was unable to supply Britain with supplies then all of the other fronts would suffer as a consequence. The soldiers in the Western Front would starve enabeling the Enemy Armies to advance. ...read more.

Conscription meant that everyone, from all walks of life, helped their country. Not everyone agreed with conscription, many members of parliament voted against it. Others did not go to war due to political or religious beliefs. They were called conscientious objectors or conchies. They had to appear in front of a tribunal to prove that they had valid reasons. If not they were often put in prison where they were badly treated. Some chonchies helped at the front as stretcher bearers; these men had a life expectancy of about 3 days. In 1914 the government introduced DORA this stood for the defence of the Realem Act. This gave the government a wide range of powers, some of which included censership of what the publicfopund out about the wa and what enemy countries found out about the allies, thus ensuring no piece of information got into the wrong hands. The government was able to use any building as part of the war effort and to take over various industries including the coal industry, ensuring that business men did not profit from production. In 1915 the munitions crisis occurred due to the stalemate on the Western Front as armament and weapons were running out. Men had to train with wooden sticks as there were insufficient rifles to equip each man. The bombardment of enemy trenches could not continue if there were no shells. Some soldiers were only allowed to use 3 rounds of shot per day. The situation was looking dire for the government at this time. The daily male put the national scandal into circulation and as a result a coalition government was formed so that all parties could work together. Lollyd George was made Minister of Munitions. One of the initial problems of the munitions crisis was that too many skilled young workers had gone to war in search of better pay. The government had to recall many of these men. ...read more.

Each of the fronts played an important part in winning the war. The public viewed the Western Front as the only War Front as this was where most of the soldiers were sent, although others were sent to Gallipoli, The Balkans and the middle East. The Western Front had the most casualties which is why it will always be perceived as the most important. The war in the air was vital for surveillance, advancements in aviation and morale boosting. It gave the public something they could understand and belive in. The war at sea proved to be a turning point for the Allies. The Allies starved the Germans into surrendering, thus weakening them and rendering their last offensive unsuccesfull. The war at sea brought the Americans into the picture at a time when the Allies needed reinforcement. The Americans brought with them artillery, equipment and strong healthy men at a time when they were most needed. The war at sea also supplied the troops on various fronts with food and ammunitions so that they were as strong as circumstances would permit. The Home Front was the provider of men for enlistment, was the center for propaganda and made ammunitions and artillery to be used by the troops. DORA was introduced as part of the Home Front offensive to protect civilians and information, and brought women into action replacing the men who were away. The Home Front also provided nurses and kept the nation at Home running smoothly so that the men could return to an organised country at the end of the war. The Western front was where the fighting took place where thousands of men died and where some of the most heroic and dangerous battles ever took place. The men on the Western Front clearly had the hardest task with variable weather conditions and the dreaded over the top manoeuvre. It was also the most traumatic but it would not have succeded without the help and combination of the other three fronts. The Allied victory was due to an imalgamatoion of effort from all the fronts. ...read more.