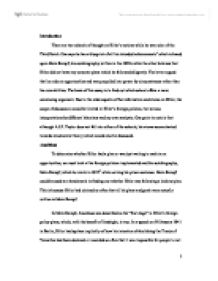 There are two schools of thought on Hitler's actions while he was ruler of the Third Reich.

Introduction There are two schools of thought on Hitler's actions while he was ruler of the Third Reich. One says he has a blueprint of all his intended achievements1 which is based upon Mein Kampf, his autobiography written in the 1920s while the other believes that Hitler did not have any concrete plans which he followed diligently. The latter argued that he rode on opportunities and was propelled into power by circumstances rather than his own abilities. The basis of this essay is to find out which school offers a more convincing argument. Due to the wide aspects of the information and views on Hitler, the scope of discussion would be limited to Hitler's foreign policies, the various interpretations by different historians and my own analysis. One point to note is that although A.J.P. Taylor does not fall into either of the schools, his views seems slanted towards structuralist theory which would also be discussed. Anschluss To determine whether Hitler had a plan or was just waiting to cash in on opportunities, we must look at his foreign policies implemented and his autobiography, Mein Kampf, which he wrote in 19252 while serving his prison sentence. Mein Kampf could be used as a benchmark in finding out whether Hitler was following a laid-out plan. ...read more.

The Anschluss thus represented Hitler's opportunism where the decision to annex Austria came at the last minute. Although Hitler might have intentions to annex Austria into the German Reich long ago, it was not one of the maturing of carefully thought out plans. Thus I would find it appropriate to agree with the structuralist argue that Hitler was indeed an opportunist. Anschluss came at a point when Hitler least expected it he was smart enough to seize to seize the opportunity. Czechoslovakia Bullock had argued that following the annexation of Austria, the annexation of Czechoslovakia would be the "second necessary step in the development of [Hitler's] programme for securing Germany's future"11, the second objective that was discussed during the Hossbach Conference on 5th November 1937 which outlined Hitler's view of the future. It was agreed that Austria and Czechoslovakia should be taken simultaneously.12 However, this did not occur accordingly as planned. Anschluss with Austria had instead, improved Germany's strategic position in central Europe13, to allow Hitler to take over Czechoslovakia should an opportunity arise. He might have thought of using Austria to "encircle the Czechs and act as a satellite in the conflicts to come"14, which in some ways indicated his programme in achieving Lebensraum for Germany. Taylor argued that the conclusion which drawn from the Hossbach Conference showed that Hitler did not really have any concrete plans as to what he wanted. ...read more.