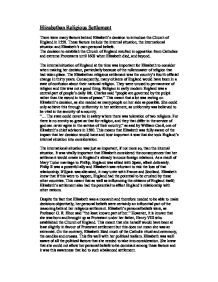 Elizabethan Religious Settlement There were many factors behind Elizabeth's decision to introduce the Church of England in 1558. These factors include the internal situation, the international situation and Elizabeth's own personal beliefs. The decision to establish the Church of England resulted in opposition from Catholics and extreme Protestants until 1603 when Elizabeth died, and beyond. The internal situation of England at the time was important for Elizabeth to consider when making her decision, particularly because of the rollercoaster of religion that had taken place. The Elizabethan religious settlement was the country's fourth official change in thirty years. Consequently, many citizens of England would have been in a state of confusion about their national religion. They were unused to permanence of religion and this was not a good thing. Religion in early modern England was a central part of people's daily life. Charles said "people are governed by the pulpit rather than the sword in times of peace." This meant that a lot was resting on Elizabeth's decision, as she needed as many people on her side as possible. She could only achieve this through uniformity in her settlement, as uniformity was believed to be vital in the security of a country. ...read more.

Doctor Hudson denies the existence of united opposition to Elizabeth and instead presents the idea of a group of Cambridge men with beliefs somewhere between Lutheran and Calvinist. Doctor Hudson traced the relationship between these men in Elizabeth's government and claims that the religious settlement was based on their ideals. These conflicting ideas about the factors that resulted in the Elizabethan Religious Settlement do appear to be confusing, but the widely accepted understanding in the present day is that Elizabeth considered the internal and international situations of England as well as her personal beliefs and ended up with the balanced settlement she wanted. This is backed up simply and concisely by the fact that se certainly resisted any changes to it over the next forty years of her reign. Once Elizabeth imposed her settlement in 1559 with the act of supremacy, the act of uniformity and the 39 articles, it seemed that the settlement was perfectly balanced. To please Catholics, Elizabeth was called the 'Governor' and not the 'Head' of the Church, episcopacy was retained and ministers wore vestments. To please Protestants, Elizabeth ruled the church, the bible and services were in English and communion tables were used instead of altars. ...read more.

A few writers of these were executed. Shortly after this, in 1593, the Conventicle Act made it illegal to belong to a puritan assembly. The Puritans felt comfortable, when the Act of Uniformity was passed, in mocking the Catholic faith. At a procession at the precincts of St Paul's, a printer's apprentice even felt so comfortable as to snatch and smash the procession cross, and then to run off with a figure of Christ, declaring that he was carrying the devil's guts. Both Puritans and Recusants were unhappy with specific details of the settlement and took action to try to change these things. Elizabeth and her government then tightened rules and laws to try to stop this action and there were deaths on both sides. In conclusion, the factors behind Elizabeth's decision were the internal situation, the international situation as well as her personal beliefs. Consideration of these factors resulted in a settlement that Elizabeth was happy with but extremists from both protestant and catholic faiths were not. Puritans and recusants acted out against the settlement in a variety of ways which Elizabeth and her parliament then restricted with laws and regulations. Ultimately, the actions of both sides came to nothing and the settlement remained in place largely unchanged throughout Elizabeth's reign and into James'. ...read more.