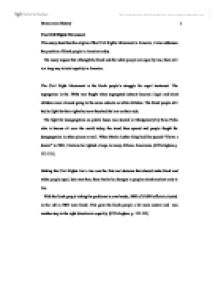 This essay describes the origins of the Civil Rights Movement in America, it also addresses the position of black people in America today.

The Civil Rights Movement This essay describes the origins of the Civil Rights Movement in America, it also addresses the position of black people in America today. The essay argues that although the black and the white people are equal by law, there still is a long way to total equality in America. The Civil Right Movement is the black people's struggle for equal treatment. The segregation in the 1950s was fought when segregated schools became illegal and black children were allowed going to the same schools as white children. The black people still had to fight for their rights but now they had the law on their side. ...read more.

With the black people taking the problems in own hands, 5000 of 50.000 officials elected in the US in 1985 were black. This gave the black people a bit more control and was another step in the right direction to equality. (O'Callaghan, p. 112-113) Barack Obama is the first black man to be elected president of the US. Mr Obama got 99% of the black African American voters' votes. He also got the majority of the young and educated whites, a majority of Asians, Americans of Hispanic origin, and Native Americans. Although he lost the overall white votes, this time the votes would last all the way. ...read more.

In 2004, 24.7% of African American families lived below the poverty level. In 2007, the average African American income was $33,916, compared with $54,920 for white. (Wikipedia list) The black people in America have come a long way during the recent decades, but despite of the law of full equality there still are big differences in both economy and social life between white and black people. The fact that the current President of the US is a black man is a proof of the black people's success. Although the major reactions to the choice of president, both positive and negative, in the US and in the rest of the world also shows that full equality is not yet reached. ...read more.