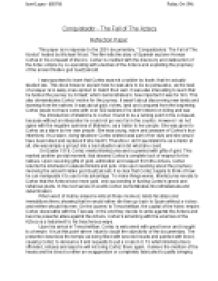 This paper is in response to the 2001 documentary, &quot;Conquistadors: The Fall of The Azetcs&quot; hosted by Michael Wood

﻿Jarett Lopez - 6385761 Friday, Oct 19th Conquistador - The Fall of The Aztecs Reflection Paper This paper is in response to the 2001 documentary, "Conquistadors: The Fall of The Azetcs" hosted by Michael Wood. The film tells the story of Spanish explorer Hernan Cortes in his conquest of Mexico. Cortez is credited with the discovery and destruction of the Aztec empire by co-operating with enemies of the Aztecs and exploiting the prophecy of the ancient Native god Quetzalcoatl. I was surprised to learn that Cortez was not a soldier by trade, that he actually studied law. This does however explain how he was able to be so persuasive, as the task of a lawyer is to sway ones opinion to match their own. It was also interesting to learn that he funded the journey by himself, which demonstrates to how important it was for him. This also demonstrates Cortez' motive for the journey, it wasn't about discovering new lands and learning from the natives. ...read more.

Upon receiving gifts of gold, admiration and respect from the Aztecs, Cortez returns the kindness in useless trinkets and junk. Also upon learning about the prophecy involving the ancient Native god Quetzalcoatl, it is clear that Cortez begins to think of how he can manipulate it to use to his advantage. To make things worse, Montezuma reveals to Cortez that the Aztecs have more gold, only succeeding in fueling Cortez's greed and nefarious plans. In the next series of events Cortez demonstrates his ruthlessness and determination. When word of mutiny arises he kills all those involved, lands his ships and immobilizes them, showing that he would rather die than go back to Spain without a victory, and neither should his men. On the journey to Tenochetitlan, the capital of the Aztec empire, Cortez does battle with the Tlaxcala. In the end they decide to unite against the Aztecs and become powerful allies against the Aztecs. ...read more.

I find it highly unlikely that within a week, a civilisation that was successful and flourishing for years, would be so very ashamed of their leader to the point that they would murder him. It is far more logical that they would try to free him and kill Cortez and the other Spaniards. Also after arresting Montezuma, Cortez was able to get more gold, once he had all he could carry, Montezuma had no further use, therefore I believe it was Cortez who killed Montezuma. Overall I found the documentary interesting and informative, but was very one sided and lacked more information from the native's perspective. I would have liked to have heard more accounts of the story from the native's point of view, but due to the war and the disease that the Spaniards brought to the Aztecs many died during the colonization. The lack of equal representation of events can be seen throughout history, because it is widely known that history is written by the winners of war, not the losers. ...read more.