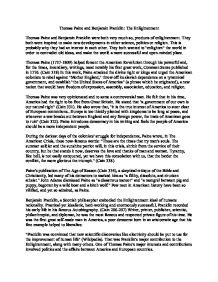 Thomas Paine and Benjamin Franklin: The Enlightenment Thomas Paine and Benjamin Franklin were both very much so, products of enlightenment. They both were inspired to make new developments in either science, politics or religion. This is probably why they had an interest in each other. They both wanted to "enlighten" the world in order to contradict old ideas, and make the world a more successful and open-minded place. Thomas Paine (1737-1809) helped foment the American Revolution through his powerful and, for the times, incendiary, writings, most notably his first great work, Common Sense published in 1776. (Cain 318) In this work, Paine attacked the divine right or kings and urged the American colonists to rebel against "Mother England," throw off its slavish dependence on a tyrannical government, and establish "the United States ...read more.

During the darkest days of the colonists' struggle for independence, Paine wrote, in The American Crisis, these now-famous words: "These are the times that try men's souls. The summer soldier and the sunshine patriot will, in this crisis, shrink from the service of their country, but he that stands it now, deserves the love and thanks of man and woman. Tyranny, like hell, is not easily conquered, yet we have this consolation with us, that the harder the conflict, the more glorious the triumph." (Cain 338) Paine's publication of The Age of Reason (Cain 334), a skeptical critique of the Bible and Christianity, led many of his detractors to marked him as "a filthy, dissolute, and drunken atheist." ...read more.

That was Franklin's major contribution to the Enlightenment, along with many others. One of Thomas Paine's major interests and contributions involved politics and the affairs between America and European countries. Franklin's abandonment of Puritanism in favor of the enlightenment's rationalism reflects a central shift in American society in the eighteenth century. (Cain 201-202)In addition, his works reflect the growing awareness of America as a country with values and interests distinct from those of England; a movement that, of course, finds its climax in the Revolution. (Cain 203) Franklin's participation in the growing confidence of the eighteenth century that humanity could, through personal effort and social reform, analyze and deal with social problems reveals the optimism and self-confidence of his age, as do his scientific achievements. His belief that theory should be tested primarily by experience not logic also reflects his age's belief that reason should be tested pragmatically. (Cain 211) ...read more.