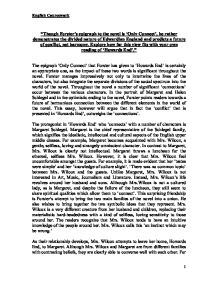 &quot;Though Forster's epigraph to the novel is 'Only Connect', he rather demonstrates the divided nature of Edwardian England and predicts a future of conflict, not harmony. Explore how far this view fits with your own reading of 'Howards End'.&quot;

"Though Forster's epigraph to the novel is 'Only Connect', he rather demonstrates the divided nature of Edwardian England and predicts a future of conflict, not harmony. Explore how far this view fits with your own reading of 'Howards End'." The epigraph 'Only Connect' that Forster has given to 'Howards End' is certainly an appropriate one, as the impact of these two words is significant throughout the novel. Forster manages impressively not only to intertwine the lives of the characters, but also integrate the separate divisions of the social spectrum into the world of the novel. Throughout the novel a number of significant 'connections' occur between the various characters. In the portrait of Margaret and Helen Schlegel and in the optimistic ending to the novel, Forster points readers towards a future of harmonious connection between the different elements in the world of the novel. This essay, however will argue that in fact the 'conflict' that is presented in 'Howards End', outweighs the 'connections'. The protagonist in 'Howards End' who 'connects' with a number of characters is Margaret Schlegel. Margaret is the chief representative of the Schlegel family, which signifies the idealistic, intellectual and cultural aspects of the English upper middle classes. For example, Margaret becomes acquainted with Mrs. Wilcox, a gentle, selfless, loving and strangely omniscient character. In contrast to Margaret, Mrs. Wilcox is clearly not intellectual. Margaret throws a luncheon for the ethereal, selfless Mrs. Wilcox. However, it is clear that Mrs. Wilcox feel uncomfortable amongst the guests. For example, it is made evident that her 'tastes were simple' and her 'knowledge of culture slight'. 'There was no common topic' between Mrs. Wilcox and the guests. Unlike Margaret, Mrs. Wilcox is not interested in Art, Music, Journalism and Literature. Instead, Mrs. Wilcox's life revolves around her husband and sons. Although Mrs.Wilcox is not a cultured lady, as is Margaret, and despite the failure of the luncheon, they still seem to share spiritual qualities which allow them to 'connect'. ...read more.

While he needed the support from Margaret when he had been exposed, he is unwilling to succour another, and so Margaret is attempting to sever his isolation and halt his detachment from reality. Margaret tells her partner; 'You shall see the connection if it kills you, Henry! ...A man who ruins a woman for his pleasure, and casts her off to ruin other men...These men are you. You can't recognise them, because you cannot connect.' Some readers think that what happens at the end of the novel is that through 'connecting' with Henry, Margaret succeeds in undermining Henry's defences. However, it is rather the indirect influence of Margaret's 'connection' of Henry and Charles to the Basts that really brings about Henry's change. Henry eventually must face the discovery that his son, Charles, has caused the death of Leonard Bast, and Charles must serve time in prison. Henry is a broken man, but Margaret undertakes his care. Henry undergoes a breakdown and finally recognises that his values were at fault. His obtuseness and ignorance converts into humbleness and awareness. Henry eventually is reconciled to Helen. She and her illegitimate child join Margaret and Henry at Howards End, where peace and stability are enjoyed. It is here when these 'connections' and reconciliation are imposed to provide a source of hope for harmony in the future. In this ending Forster is clearly trying to portray the possibility of a unified Edwardian England. Forster has earlier prepared for the climactic scene of harmony and connection by his scene of reconciliation between Margaret and Helen, 'the past sanctifying the present'. Foster thus illustrates the restoration of the family unit, and here too attempts to convey an impression of inner-harmony and connection between the characters. The situation of the living circumstances at the end of the novel can be said to present harmony. A harmony is achieved at Howards End, as it is inhabited by Margaret, Henry, Helen and the Bast love child. ...read more.

If 'only connect' is going to be associated with England, then it is unfair to make a prediction of the future of England upon reading 'Howards End'. Forster does not look upon the whole of England. He avoids looking at people of great wealth such as aristocrats and upper class, and although he includes Leonard Bast, he does not look at the vast numbers of the working class people at all. When reading 'Howards End', readers are aware of the 'conflicts' and 'connections' between the families. Through many relationships within the novel, people are able to 'connect' and share interests. They are also able to share ideas and beliefs with one another. However, apart from these, too many disagreements occur. These broad fault-lines between groups of people are very evident in the novel, and Forster does little to persuade us they can be healed. They are crystallised in the situation between Henry and Margaret. It is clear that Henry is afraid of emotion. His motto is 'concentrate', while Margaret's is 'only connect'. This difference in attitudes creates an irreconcilable tension in the novel. They are very different people who represent extremely different ideas. The difference between 'concentrating' and 'only connecting' is the difference between Margaret and Henry; it is the difference between the Schlegels and the Wilcoxes, and the primary conflict in 'Howards End.' Through this argument, it can be concluded that the sense of 'conflict' outweighs the attempt to present the Schlegels, Wilcoxes and Basts as connected. Forster is very much similar to the way that Margaret thinks. Forster tends to be biased towards Margaret's ideas and beliefs. It can be said that Forster and Margaret share the same aphorism; 'Only Connect'. Although Margaret encourages 'connection', the hope for 'harmony' seems doubtful. The attempted 'connections' prove unsuccessful. Most significantly, the 'connection' between Leonard Bast and the Schlegels, finally results in his death and Forster's contrived and sketchy 'harmonious' conclusion cannot rescue the argument. Rather what is stressed is the 'divided nature of Edwardian England' and a future of conflict. ...read more.