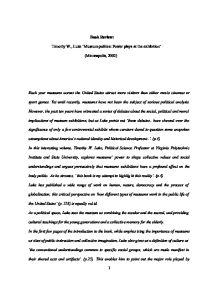 Book Review: Timothy W., Luke 'Museum politics: Power plays at the exhibition' (Minneapolis, 2002) Each year museums across the United States attract more visitors than either movie cinemas or sport games. Yet until recently, museums have not been the subject of serious political analysis. However, the past ten years have witnessed a series of debates about the social, political and moral implications of museum exhibitions, but as Luke points out 'these debates.. have chewed over the significance of only a few controversial exhibits whose curators dared to question some unspoken assumptions about America's national identity and historical development..'. (p.4) In this interesting volume, Timothy W. Luke, Political Science Professor at Virginia Polytechnic Institute and State University, explores museums' power to shape collective values and social understandings and argues persuasively that museums exhibitions have a profound effect on the body politic. As he stresses, ' this book is my attempt to highlight this reality'. (p.4) Luke has published a wide range of work on human, nature, democracy and the process of globalization; this critical perspective on 'how different types of museums work in the public life of the United States' (p. 218) is equally valid. As a political space, Luke sees the museum as combining the secular and the sacred, and providing cultural teachings for the young generations and a collective memory for the elderly. In the first few pages of the introduction to the book, while emphasizing the importance of museums as sites of public instruction and collective imagination, Luke also gives us a definition of culture as 'the conventional understandings common to specific social groups, which are made manifest in their shared acts and artifacts'. ...read more.

other hand, 'the unspeakable is said, the unimaginable is seen and the incomprehensible is simplified in ways that are too entertaining' (p.38) Luke denotes a double horror as the Holocaust is transformed 'into mechanically reproduced spectacles in the rhetoric of museum entertainment'.(p. 57) Both exhibitions fail in the attempt to weave the events of the Holocaust into a larger fabric of genocide around the world: while the Tolerance Museum focuses at least partially on the Armenian genocide in the Ottoman empire, on Pol Pot's reign of terror in Cambodia and on the 'desaparicidos' in Latin America; the Holocaust Memorial Museum display focuses almost exclusively on the six million Jewish victims and their special persecution by the Nazi Regime. Even more, both these portrayals of immense epic evil fail to explain how intolerance grew in advanced industrial societies and how individual decisions and ordinary acts brought participants to commit genocide. '...The attribution of such events purely to demagogues, who artfully exploit mass fear and frustrations among receptive audiences by using personal magnetism to attack scapegoat populations, simplifies all of history's genocidal episodes to fit the same psychic profile given to Hitler and the Nazis in Germany from 1918 through 1945.' (p. 51) '...They give far too much away... they do not show how people could fall under the sway of Hitler; they do not demonstrate the dangerous excitements of fascism. They also require too little from the visitor, who can get swept into the pulse and pace of the show, awed by the artifacts, swayed by the statistics. They do not indicate how necessary it was to think and fight back, right then and there, like many German communists and socialists tried to do. ...read more.

The writing style is very good, although Luke uses a very dense sociological and academic language which can at first can be quite intimidating for a non-English mother-tongue.. Although concentrating on external museum politics and the outside consequences of museum exhibitions, the book says too little about internal museum politics and about the internal struggles which occur within museums. At the same time not enough attention is given to the important role played by the marketplace in attracting visitors and in making exhibitions an entertaining as well as an educational experience for them. And the tremendous fall in museum exhibition attendance after 9/11 is also not addressed at all. Luke's analysis of museums and their policies hardly takes into account basic issues like museum budgets, finance, donations, fund-rising and marketing. Policy documents are not cited, staff observations are unrecorded, and artists included or excluded are not consulted. It would have been interesting to know something more about the social origin of the visitors to museum exhibitions: do museums attract mainly individuals coming from society's elites or upper classes? Does the ticket cost play a significant role in attracting different social classes to museum exhibitions? Or is this role played entirely by the exhibition topic? Though containing a wealth of comments on globalization and culture, Luke's book remains a study of museums confined to the United States of America, with little or no reference made to museum exhibitions in Europe or elsewhere in the States. Timothy Luke's volume is worthwhile reading; it challenged my thinking and I learned from it. Yet, one unanswered question remains: can museums be a public space for discursive wars, a site of struggle between new unconventional understandings and collectively accepted views of reality, and not be destroyed by these wars of position? 1 ...read more.