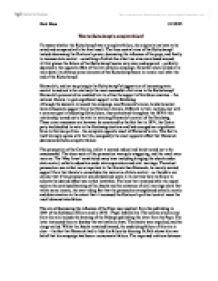 To assess whether the Kulturkampf was a complete failure, the original aims have to be noted and compared with the final result. The three central aims of the Kulturkampf include decreasing the Zentrum's power

The sheer scale of the persecution was quite staggering, and the result even more so. The 'May Laws' constituted many laws including bringing the church under state control, catholic education under state supervision and civil marriage. The actual persecution was in fact more important to the liberals than Bismarck, he merely wanted support from the liberals to consolidate his main aim of state control - so therefore we can say that if the persecution was divided and weak in its motives then its failure to achieve the desired effect was in fact inevitable. The laws that remained after the repeal such as the continued banning of the Jesuits and the existence of civil marriage show that whilst some remain, the over-riding fact that the persecution strengthened catholic morale and determination to the extent that it increased the Zentrum's political control mean the result demonstrates failure. ...read more.

In one sense, and only to a small extent, I believe Bismarck was remotely successful in retaining and increasing state control, this can be seen in the more notable 'Falk Laws' such as the education and civil/legal rights coming under state control. However, the sheer fact that the Zentrum's power increased as a direct result of the failure of the 'Falk Laws' means it failed to decrease the power of the Central Party. Any of the remaining laws or evidence of the Kulturkampf show that some aspects survived and were successful, but these minor successes are countered by a host of failures. These failures can be seen in Bismarck's attempts to completely disassociate himself with the Kulturkampf, the increase in power of the Zentrum party - failure of the Kulturkampf's main aim. While the term 'complete failure' is probably not accurate, the Kulturkampf was unsuccessful in a majority of its aims. Zach Moss 04/10/05 ...read more.