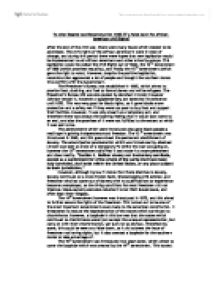 To What Degree was Reconstruction 1965-77 a false dawn for African-American Civil Rights?

To what Degree was Reconstruction 1965-77 a false dawn for African-American civil Rights? After the end of the civil war, there were many issues which needed to be addressed. The civil rights of the African American's were in need of change, and during this period there were hopes that new legislation would be implemented to aid African Americans and other minority groups. This legislation would be called the Civil Rights Act of 1866, the 14th Amendment of 1868 (which promised equality), and finally the 15th Amendment (which gave the right to vote). However, despite the positive legislation, reconstruction aggravated a lot of people and brought the southern states into conflict with the Government. The Freedmen's Bureau was established in 1865, which aimed to provide food, clothing, and fuel to formal slaves and white refugees. The Freedmen's Bureau bill was also passed by Abraham Lincoln; however Johnson vetoed it, however a supplementary act extended its existence until 1870. ...read more.

Sharecropping still existed, and freedmen who had come out of slavery with no qualifications or experience became unemployed, so the living conditions for most freedmen did not improve. Slave-owners were also reluctant to let their slaves leave, and often kept them illegally. The 14th Amendment however was introduced in 1870, and this aimed to further secure the rights of the freedmen. This turned out to be one of the most important Amendments ever made to the American constitution. It threatened to reduce the representation of the states which continued to discriminate. However, a loophole in this law was that the states which continued to discriminate would just accept the unequal representation, but carry on with their discrimination, yet just not so obvious. Therefore by some, this could be seen as a false dawn, as it did address the issue of freedmen not having rights, but it also created a loophole for the southern states to take advantage of. ...read more.

They were a terrorist group which aimed to scare black people into not voting, and to basically cause terror because they were black. They at first were not an ultra-violent group, however as time progressed they quickly became increasingly violent, as lynchings were common, and they would often target the black people who were doing well for themselves, I.E lawyers who were doing a lot for civil rights, or those who went to vote. Because of this huge suppression and hatred, a lot of black people were scared to vote and in reality voting was not a freedom for black people. Some historians would say that reconstruction it itself did not really care for the black rights, and that it was a political move to try and remain Republican power in the south. Abraham Lincoln himself did not have a clear policy for freed slaves after the Civil War, so reconstruction was not seen as a solid plan from the start, it was looking like a false dawn. "False Dawn" - "something which seems to show that a successful period is beginning or that a situation is improving when it is not. ...read more.