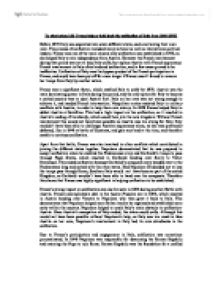 To what extend did France help or hold back the unification of Italy from 1848-1870?

To what extend did France help or hold back the unification of Italy from 1848-1870? Before 1870 Italy was separated into seven different states, each one having their own ruler. The process of unification included many national as well as international political leaders. France was one of the main reasons why unification was established in 1870, as she helped Italy to win independence from Austria. However the French involvement during that period was not to help Italy unify, but replace Austria with French supremacy. French involvement in Italy often hindered unification, and in few cases proved to be ineffective. Unification of Italy was the bypass product of the French participation in France, and could have been put off for even longer if France wasn't forced to remove her troops from Italy by another nation. France was a significant factor, which enabled Italy to unify by 1870. Austria was the main dominating power in Italy during the period, and the only option for Italy to become a united country was to eject Austria first. ...read more.

Napoleon helped to crush Italy's main obstacle to unification- Austria. Once Austria's occupation of Italy ended, the states could unify. Although this would not have been possible without Napoleon's help, as Italy was too weak to face Austria on her own, Napoleon's involvement in Italy had its own drawbacks in the unification. Due to France's participation and engagement in Italy, unification was sometimes procrastinated. In 1849 Napoleon was responsible for destroying the Roman Republic and restoring the Pope to rule Rome. Roman Republic was the foundation for a unified Italy, and because Napoleon dissolved it he prevented unification taking place earlier. Furthermore, he guaranteed protection to the Pope until 1870 by ordering the Neapolitan troops to remain in Rome, precluding it form joining the rest of the united Italy. At Plombiers the agreement between Cavour and Napoleon was to replace the Austrian supremacy with France. France was promised to be given Niece and Savoy which resulted in less states being unified. Napoleon was not dedicated to the agreement at Plombiers, which aimed to drive Austria out completely, and pulled out from the war with Austria in 1859 too early, which shows his contribution in unification was not dedicated as Italy was left to face Austria alone. ...read more.

Although these factors were a significant obstacle in the unification of Italy, France's involvement hindered it more. The national social and economic problems emerged as a result of a forced government and started to be solved in the future; demonstrating it only prevented it initially. France's involvement however, was continuous, since 1848 the French tried to evict Austria but at the same time keep Italy weak in order to ensure French dominance in Italy as well as Europe. In conclusion, France helped to make Italy independent, and therefore aiding unification, by evicting Austria from the country, which wouldn't have been possible otherwise. On the other hand, French involvement resulted in hindering the process of unification. French wanted to establish their own supremacy in the country, and although it appeared like they were interested in aiding the unification as they assisted Italy in few battles against Austria, the real cause was different. This is evident when France refused to remove her troops from Rome, central to Italian unification, until 1870 when France was threatened with a war with Prussia. France helped unification, but it was not intentional, and overall her actions resulted in delaying the process. ...read more.