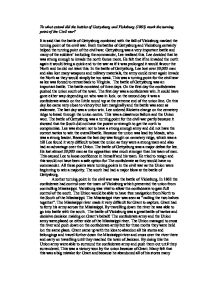 To what extend did the battles of Gettysburg and Vicksburg (1863) mark the turning point of the Civil war?

This caused Lee to loose confidence in himself and his team. He tried to resign and this would not have been a safe option for The confederate as they would have no commander. All these points were turning points in the civil war as the Union were beginning to win a majority. The south had had a major blow at the battle of Gettysburg. Another turning point in the civil war was the battle of Vicksburg. In 1862 the confederate had control over the town of Vicksburg which prevented the union from controlling Mississippi. Vicksburg was vital to allow the confederate to gain full control of the south. The Union would be able to have free navigation from North to the South of the Mississippi. The Mississippi river was seen as "nailing the two halves together". The Mississippi river made it very difficult for Grant to capture. Grant had to ferry his army across the Mississippi. ...read more.

Because the river was seen as nailing the two halves together by the union gaining control of the south full control would be made and the south would be seen as a whole. Overall we can see that the battles of Vicksburg and Gettysburg were the turning point to the civil war to a certain extent. It was the battles of Vicksburg and Gettysburg that were very important events and ensured many union victories but also battles such as Antitam which help to make the turning point of the civil war. The battles of Gettysburg played a very important rule in t he civil war as it allowed Grant to become a national hero and the problems of the Mississippi river to be sorted out. It also showed the south that they did not have the "Knockout blow" to get the north to compromise peace. Many can see that these battles were very important turning point in the civil war. ...read more.