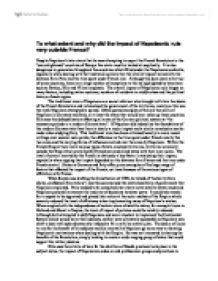 To what extent and why did the impact of Napoleonic rule vary outside France?

To what extent and why did the impact of Napoleonic rule vary outside France? Despite Napoleon's later claim that he was attempting to export the French Revolution to the 'less enlightened' countries of Europe this claim must be looked at sceptically. It is also dangerous to generalise throughout the countries which fitted under the Napoleonic umbrella, especially when dealing with the traditional opinion that the level of impact varied with the distance from Paris and the time spent under French role. Although this does seem to be true of some countries, there are a large number of exceptions to this as highlighted by historians such as Davico, Ellis and Villani emphasis. The overall impact of Napoleonic rule hinges on many factors, including native customs, numbers of residents in middle class and the political history of each region The traditional view of Napoleon as a social reformer who brought with him the ideals of the French Revolution and rationalised the government of the territories, mainly as this was the myth Napoleon attempted to spread. Often quoted examples of this are the work of Napoleon in Germany and Italy, or at least the states that would later make up these countries. Ellis sees the defeudalisation affecting all areas of the German political system as "the necessary prelude to a modern German state". If Napoleon did indeed lay the foundations of the modern German state then there is clearly a major impact and a similar conclusion can be made when studying Italy. ...read more.

The businessmen were prepared to argue for their local interests and as such saw little a general continuity with their lives before French rule. A similar thread can be applied to the Piedmont example used by Rosalba Davico in her studies of social trends, a definite continuity exists between the pre-Napoleon and the time during and after French rule. Much of the 'defeudalisation' had been achieved up to a century earlier which reduced the impact of reforms seen as dynamic in France. As in the Roer department the middle classes were able to adapt to Napoleonic rule and continue their dominance of society with little bother, possibly even being aided by the sales of the 'biens nationaux' Despite the finalisation of defeudalisation throughout the Empire, the sale of 'biens nationaux' gave the existing middle classes a chance to immediately regain their power by monopolising the land market. In Piedmont, Italy, the sale of church land was unquestionably monopolised by the wealthy elites with very few peasants purchasing their own land. Working with Ellis' criteria, it is clear that in these two examples, French rule has done little other than officially end feudalism and secure the wealthy elite's position in society through the sale of 'biens nationaux' in the annexed lands. The situation differs in the states that were brought under French control at a later time, namely Tuscany, Rome or Oldenburg, where very little was implemented in the few years of French rule. ...read more.

Another state used by Napoleon in his spoils' system was the grand duchy of Warsaw in which the old regime elite again managed to reclaim their power through attempts to graft the Code Napoleon into their social structure. It may be a logical assumption that the time spent under French control had a large impact simply because it gave more time for the reforms of Napoleon to be implemented but this disregards the changing attitude of Napoleon as time progressed. He placed more and more emphasis on his own military and economic aims, paying no attention to the needs of the Italian, German or Polish subjects, preferring to abandon the ideals of legal equality and rationalisation of resources for his personal dynastic aims. Whilst certain states such as the Kingdom of Naples benefited from the large scale reforms brought in by the French, the most striking similarity between most of the subject states in the Empire was the continuation of a devolved form of feudalism. The varying and traditional feudal structures of the subject states were allowed to continue by Napoleon as a practical compromise and in many areas became stronger during French rule. The impact of French rule depended on a number of independent factors that prevent any wide ranging generalisations throughout the continent. Although the centralised format of French government may have reduced the impact of reforms with states further away from Paris, the continuation of feudalism in states closer to France, for example the left bank of the Rhine, proves that this is not a concrete argument. ...read more.