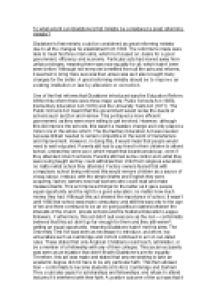 To what extent can Gladstones first ministry be considered a great reforming ministry?

﻿To what extent can Gladstone?s first ministry be considered a great reforming ministry? Gladstone?s first ministry could be considered as great reforming ministry due to all the changes he established from 1868. The reforms he made were able to meet his three main aims, which he focused on; desire for a good government, efficiency and economy. Particular acts had moved away from unfair privileges, meaning there was now equality for all, which hadn?t been seen before. Although not everyone benefited from all the acts and reforms, it seemed to bring more success than unsuccess as it also brought many changes for the better. A great reforming ministry should be to improve an existing institution or law by alteration or correction. One of the first reforms that Gladstone introduced was the Education Reform. Within this reform there were three major acts; Public Schools Act (1868), Elementary Education Act (1870) and the University Tests Act (1871). The Public Schools Act meant that the government would revise the deeds of schools such as Eton and Harrow. This portrayed a more efficient government, as they were more willing to get involved. However, although this did improve the schools, this wasn?t a massive change as it only played a minor role in the whole reform. ...read more.

British troops were withdrawn from the self governing colonies such as Canada and New Zealand, as Gladstone believed these colonies would only be self governing if the looked after themselves. However, this caused huge opposition in Canada, which feared US invasion. The Army reform suggested that it caused more serve problems then it was facing before. The Civil Service Reform was in 1871 after the Crimean War which pointed out the inadequacies of this service. Workers were lazy, incompetent, inefficient and lacking in initiative. However, it was imperative that a more efficient Civil Service was introduced to accommodate the complex administration of the company. A liberal pressure group, founded in 1855, petitioned for the talented middle class to be able to be recruited to the Civil Services. Due to Gladstone?s aims he was keen to implement the terms of the 1855 report. Gladstone made it compulsory to take a competitive exam in order to enter the Civil Service, which was open to all who desired to sit it. This meant that there was an equal opportunity for all and places were now based on capability and merit rather than status. However, the Civil Service was divided into grades, corresponding to social class. ...read more.

The act was also very illiberal because it doesn?t support the laissez faire attitude in which people thought the government should not interfere. The overall act did make towns and cities safer places, but could be seen more of reorganisation rather than a great reform. The last reform that Gladstone introduced was the Legal Reform. The Judicature act, within this reform, was introduced in 1873. In this time period there were too many different types of courts, so it was decided to simplify the system to understand it. This was done by making one Supreme Court, which was kept fairly small. Before the Supreme Court it was long, complex and a very slow system. For Gladstone this removed unjustified privileges, set trade unions and gave non-conformists full legal equality. Overall, Gladstone?s idea reduced waste and was a more efficient way, as before it was too complicated. This was the last major reform of Gladstone?s first ministry, reforming the speed, complexity and cost of the laws. To conclude, I believe that Gladstone?s first ministry was a great reform as many of the Acts were changed for the better and were majorly improved, with only the minority not playing a major role and just being reorganised instead. Furthermore, Gladstone?s first ministry gave people an idea of what they should be working towards, so that things can always be improving. ...read more.