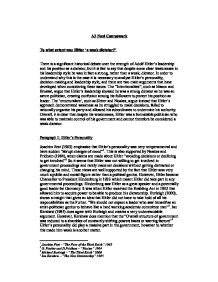 To what extent can Hitler be considered to be &quot;weak&quot;?

A2 Nazi Coursework To what extent was Hitler 'a weak dictator?' There is a significant historical debate over the strength of Adolf Hitler's leadership and his position as a dictator, but it is fair to say that despite some clear weaknesses in his leadership style he was in fact a strong, rather than a weak, dictator. In order to understand why this is the case it is necessary to analyse Hitler's personality, decision-making and leadership style, and there are two main arguments that have developed when considering these issues. The "Intentionalists", such as Mason and Broszat, argue that Hitler's leadership showed he was a strong dictator as he was an astute politician, creating confusion among his followers to protect his position as leader. The 'structuralists', such as Shirer and Noakes, argue instead that Hitler's approach demonstrated weakness as he struggled to make decisions, failed to rationally organise his party and allowed his subordinates to undermine his authority. Overall, it is clear that despite his weaknesses, Hitler was a formidable politician who was able to maintain control of his government and cannot therefore be considered a weak dictator. Paragraph 1: Hitler's Personality Joachim Fest (1963) ...read more.

Ian Kershaw also explains that Hitler had many "Peripheral decisions"9 meaning that Hitler did not focus on main decisions that were needed to be made, instead he focused on little issues. This emphases the argument that Hitler was very much aware of the problems within his regime, however chose to look at less important matters rather than take full responsibility for every single decision, which one might find to be odd in a dictatorship government. Paragraph 3 Hitler's Leadership style William L. Shirer, "The Rise and Fall of the Third Reich, 1959, and G. Noakes and D. Pridham, "Nazism 1984, all emphasise that Hitler's leadership style did effect the regime greatly. For example, Shirer says that "Hitler was bored by the details of day-to-day governing and after he had consolidated his position following the death of Hindenburg he left them largely to his aides"10 This refers to the Fuhrerprinzip doctorine established in from the 1920's. Hitler chose not to exercise his powers after the Enabling Act of 1933 allowed him to act as ruler by decree. For example, Hitler enabled Goering to access any necessary powers to get Germany ready for war. ...read more.

However, being able to bring back Germany from the debts of depressions after World War 1 and gathering millions of supporters shows Hitler that he was more of a strong dictator rather than a weak one. His personality was also interesting. In his private life, he seemed to be like any other man. However, it was said that he became very lazy at points and infuriated at others. It was this personality which affected his decision making skills as well. Also, that being said, that only happened if he actually attended meetings or took responsibility with his power, instead he shifted powers, which caused a lot of confusion in the Third Reich. He was truly interested in natural selection and wanted competition in his government. It was 'Survival of the fittest'. It would allow Hitler to shift his power and relax whilst his subordinates worked hard and gained skilled which Hitler could use to benefit the Nazi regime. Hitler didn't care about anyone's rank, just as long as his views were seen to. However, this method was very well in Hitler's eyes, but when Japan and Germany joined to declare war on the USA, the confusion and disorganisation in the Third Reich was amplified. It may not be the reason for the collapse of the Nazi regime but it would have played a huge part within it. ...read more.