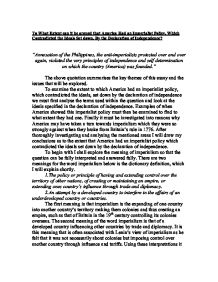 To What Extent can it be argued that America Had an Imperialist Policy, Which Contradicted the Ideals Set down, By the Declaration of Independence?

In America at the time few people liked the idea of imperialism, expanding had shown them benefits such as those of California and Oregon but imperialism meant control over other peoples by military conquest or economic domination which they did not want to be a part of. These attitudes however began to change as the end of the frontier was reached, as John A Kasson, a diplomat said in the North American Review: 'We are rapidly utilising the whole of our continental territory. We must turn our eyes abroad, or they will soon look inward upon discontent.' Again this view explored that expanding was something that came naturally once all a nations land was occupied. Now that the question has been explained and reasons for imperialism explored I shall continue to discuss examples to show to what extent America had an imperialist policy. The first example of America advancing towards an imperialist policy can be seen as the introduction of the Monroe Doctrine, which was expressed during President James Monroe's seventh annual message to congress in December 1823. Within this doctrine it was expressed that America felt that European powers no longer had the right to interfere in matters involving the Western Hemisphere and the American continent. 'as a principle in which the right and interests of the United States are involved, that the American continents, by the free and independent condition which they have assumed and maintain, are henceforth not to be considered as subjects for future colonisation by any European powers...' ...read more.

Within a short time they did so and the new Republic of Panama was created with American support. A new deal was struck and the canal commissioned with Panama relying on America and America now controlling an extremely important trade route. This example again shows America putting themselves in positions to be in an advantage over other nations highlighting another aspect of their imperialist policy. I have now looked at the reasons why America may follow an imperialist policy, how the term imperialism can be interpreted and, have shown a number of examples when America showed this imperialist policy. I shall now conclude my finding to answer to what extent America had an imperialist policy, which contradicted the ideals set down by the declaration of independence. I have not shown all the examples of when America showed signs of imperialism that I discovered my research but I have highlighted those that I felt were most important. All of the examples used have proved that America did have an imperialist policy to some extent or another they have also shown that at times some Americans felt that this policy did go against the ideals on which their nation was founded. So I conclude that America did have to a large extent an imperialist policy which contradicted the ideals set down by the declaration of independence whether they themselves recognised this policy or not as going against their own beliefs. 'Dewey took Manila with the loss of one man and all our institutions.' ...read more.