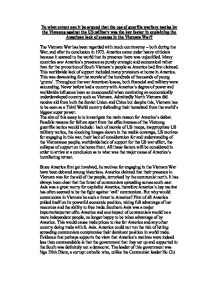 To what extent can it be argued that the use of guerilla warfare tactics by the Vietcong against the US military was the key factor in explaining the American lack of success in the Vietnam War? The Vietnam War has been regarded with much controversy - both during the War, and after its conclusion in 1973. America came under heavy criticism because it seemed to the world that its presence there was unjustified. Many countries saw America's presence as purely strategic and economical rather than for the protection of South Vietnam's people as America had first claimed. This worldwide lack of support included many protestors at home in America. This was devastating for the morale of the hundreds of thousands of young 'grunts'. Throughout the war American losses, both financial and military were astounding. Never before had a country with America's degree of power and worldwide influence been so unsuccessful when combating an economically underdeveloped country such as Vietnam. Admittedly North Vietnam did receive aid from both the Soviet Union and China but despite this, Vietnam has to be seen as a Third World country defending their homeland from the world's biggest super power. ...read more.

However the NVA and other Northern Vietnamese forces used it as a way to distract America from the Tet offensive itself . Put a footnote here to indicate you have a source for this claim. From early 1962 America encouraged Diem to adopt a policy of 'strategic hamlets', fortified villages in which the Vietnamese peasants would hopefully be isolated from the Vietcong. This strategy only created further opposition to Diem and the US regime as the people disagreed with being forced to leave their ancestral homelands and farms to build the blockades. Link to Vietnamese culture - ancestor worship - bones of ancestors buried in land nearby. Another incident that shows poor American preparation and execution But you haven't been talking about poor preparation and execution in the paragraph before - you've been talking about the fact that their behaviour was insensitive. You therefore need to introduce this slightly differently - perhaps - 'an event that highlights in an extreme form the insensitivity of American soldiers in their approach to the Vietnamese is the My Lai massacre of May 1968. This incident was a well-publicised tragedy that was has often been put down to the utter frustration that the American troops were experiencing. ...read more.

You need to provide a source for your comment about low levels of morale. Unfortunately for the Americans, the low morale led to what seemed like an infinite stream of problems for their war effort. Many of the most obvious causes for the US lack of success could be ultimately put down to a lack of morale and vice-versa. The causes and consequences of US lack of success often appear to be intertwined. Jon - there's lots that's good about this, but the one crucial problem is that the factor you highlight at the beginning of the essay - namely, Vietcong guerrilla tactics, is not mentioned at all in the essay. What you have to do is to discuss these tactics in some detail, provide evidence of how these tactics resulted in massive casualties for the Americans. Explain how Vietcong tactics didn't allow America to gain the advantage from their much higher levels of military technology. In your concluding paragraph you need to tease out all the factors to explain why you consider that guerrilla tactics was the key factor - perhaps bringing out, though, in some detail how all the other factors played a part in allowing the guerrilla tactics to be so successful. 1 The Battle for Khe Sanh, The USA and Vietnam 1945-75 - Vivienne Sanders ...read more.