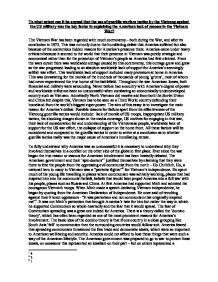 To what extent can it be argued that the use of guerilla warfare tactics by the Vietcong against the US military was the key factor in explaining the American lack of success in the Vietnam War? The Vietnam War has been regarded with much controversy - both during the War, and after its conclusion in 1973. This was not only due to the humiliating defeat that America suffered but also because of the contentious hidden reasons for America's presence there. America came under heavy criticism because it seemed to the world that their presence in Vietnam was purely strategic and economical rather than for the protection of Vietnam's people as America had first claimed. From the wars outset there was worldwide outrage caused by this controversy, this outrage grew and grew as the war progressed leading to an absolute worldwide lack of support for America's seemingly selfish war effort. This worldwide lack of support included many protestors at home in America. This was devastating for the morale of the hundreds of thousands of young 'grunts', most of whom had never experienced the true horror of the battlefield. Throughout the war American losses, both financial and military were astounding. Never before had a country with America's degree of power and worldwide influence been so unsuccessful when combating an economically underdeveloped country such as Vietnam. Admittedly North Vietnam did receive aid from both the Soviet Union and China but despite this, Vietnam has to be seen as a Third World country defending their homeland from the world's biggest super power. ...read more.

I have already mentioned the way the troops felt battling an unseen enemy, but the importance of American morale or lack thereof cannot be overlooked as a reason for the US defeat. It is hard for one who has not experienced war to understand life in a soldiers boots, especially that of a grunt in Vietnam. Never before had American troops had to endure as harsh conditions as those experienced on the battlefields of Vietnam. These unbelievably harsh conditions led to low morale in all of the troops. Many things led to this crushing lack of morale; guerilla tactics, inexperienced and young troops (the average age of a soldier in Vietnam was just 19), inability to communicate with or understand the people they were trying to defend and the looks of hatred in the very same people's eyes. The troops were used to easy living at first with long R&R breaks and short tours, involved more as a precautionary measure rather than to actually enter battle but because the superior firepower was totally ineffective in Vietnam, the troops were put onto the front line. Lack of morale in troops is always devastating to a countries war effort. A major problem that the US military faced apart from unwilling soldiers was a rife drug problem. Marijuana was readily available in Vietnam and the majority of the grunts were users. This drug did nothing to help the morale level of troops on anything more than a temporary basis. The grunts would often go into battle 'high' and this made combating the Vietcong even more difficult and the Vietcong used the US troops use of the drug to their full advantage. ...read more.

Eventually the support on the home front collapsed and the American people joined in protesting their own involvement in the war. This was another factor that led to the crushingly low levels of morale in the troops. In conclusion after considering other possible causes for the US defeat, the evidence suggests that the Vietcong the use of guerilla warfare tactics was the main cause for the US lack of success in the Vietnam War. Whilst there were clearly many other contributing factors, I have found that the use of guerilla tactics played a major role in a battle that was fought on the ground, pinning down huge numbers of US troops in Vietnam. Enough damage was inflicted on the troops that eventually sufficient pressure was bought on the US government to pull their troops out. This was when the war ended, when the US government realised they couldn't win, this was because of guerrilla tactics. I considered what the outcome of the war would have been had it been fought in a different way and believe this would have made a huge difference to the outcome of the war. The fact that America was in Vietnam for their own strategic interests rather than for the Vietnamese people was a close second in the ordering of reasons. Finally the lack of morale was the third major contributing factor but I found that this was mostly caused by the fear of the unseen enemy that the troops faced caused by guerrilla tactics. Word count: 2689 Jon Clifford 1 4 2 2 3 1 4 3 5 1 6 4 7 1 8 2 9 3 10 2 ...read more.