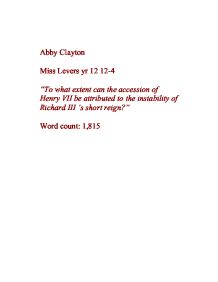 &quot;To what extent can the accession of Henry VII be attributed to the instability of Richard III 's short reign?&quot;

Abby Clayton Miss Levers yr 12 12-4 "To what extent can the accession of Henry VII be attributed to the instability of Richard III 's short reign?" Word count: 1,815 By 1485, Britain had experienced a long period of monarchy usurptions, called the War of the Roses. This disastrous period had been raging in England for many years between two main families, well known in history, the Yorks and Lancastrians. More than 500 years ago, King Edward IV died, leaving his sons, Richard and Edward, aged 10 and 12 respectively. This ongoing feud allowed the exchanging of the throne through usurption, or murder. The claiming of the throne was, as some say, easy, and it seems that anyone with a legible claim, however longwinded, could become king. The end of this ongoing feud came when 'Henry VII later took for his bride Elizabeth of York, thereby uniting the houses'1 This essays intension is to explain how and also why Henry VII got the English throne in 1485. It will include details of the circumstances in which he claimed his place, and if, in other circumstances, would he have become the famous king and a great achiever who 'survived a series of rebellions, to have restored the monarchy to stability and to have left government strong and solvent after disorder in the realm.'2 But the main question that arises in this essay is 'would Henry have become king if he did not make his claim to the throne during the reign of an unpopular king, Richard III, and not only after the short-term past, but the long-term instability of the monarchy?' ...read more.

Henry's claim to the throne however was very weak, and the fact that Henry Tudor became King of England at all is somewhat of a miracle. Henry's mother, was Margaret Beaufort, who was a descendant of Edward III. This was a long and complicated claim, as Henry's mother was the daughter of John of Gaunt, who was Edwards third child, and his wife, before they were married, leaving her as a bastard child. However, he was better than Richard III, and preferred by the people! During Richard and Buckinghams' rebellion, Henry sat watching from France, and quite cleverly learnt from Buckinghams' mistakes, so that when he went into battle with Richard, he would have a strategic plan. From one source, this essay can say that Buckingham seems to have an unimportant role in Tudor history, as it does not mention his name once, and when speaking of ' The Battle of Bosworth field' on which Henry won his crown, it says that " It was here that Henry and his forces met with Richard III and Henry won the crown"7 This essay perceives that the key factor which led up to Henry becoming King, was luck. It was luck that the only heir to the throne after Richard, his son, died. It was also Richards stupidity that led to his rebellion with his former friend, Buckingham. It was pure luck, as well as Richards ignorant personality that led people to despise him, also his lack of political rhetoric let him down, with him not having any present or recent glories which he could inform people of, only old glories. ...read more.