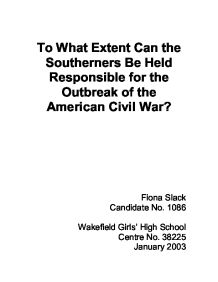 To what extent can the Southerners be held responsible for the outbreak of the American Civil War?

To What Extent Can the Southerners Be Held Responsible for the Outbreak of the American Civil War? Fiona Slack Candidate No. 1086 Wakefield Girls' High School Centre No. 38225 January 2003 The reasons a nation goes to war are usually various and often complicated, and it is no different with the American Civil War. There are many reasons supporting the view that the Southerners are responsible for the outbreak of the Civil War, it has been argued strongly that it was the Southerners hold of the controversial issue of slavery that led to the increasingly differing sections of the United States. However, the counterargument is that the Southerners felt under growing pressure to secede from the Union by aggressive Northern abolitionists and that it was the Northern reaction to the secession that ultimately led to the Civil War. Yet slavery was not the only source of discord between the two regions. The two sections were very different and they wanted different things from their national government. Many historians believe that the South was to blame for the growing gap economically between the industrialising North and the agricultural South, a gap that led eventually to the secession of the South from the Union and the outbreak of the American Civil War. In the North, society was becoming more industrialised faster than people realised. Immigrants were arriving by the tens of thousands to the Northern ports and systems of transportation and finance were blossoming in a fantastic manner. The developing industry required protection from cheap European imports, and was beginning to clamour for all sorts of aid from the Federal government. In the South, by contrast, society was much more static. ...read more.

He remarked, "of the American Civil War it may safely be asserted that there was a single cause, slavery."2. It was this interest in expanding slavery into the newer states that Rhodes felt drove the South to place the Union under tension. On the other hand, it has been argued in many ways that the Northerners could equally be held responsible for the American Civil War. The Southerners were on the defensive, as had been shown long before the abolitionists appeared on the scene in 1819-20, during the Missouri Crisis, when the North and South argued whether slavery should be permitted in the land acquired by the Louisiana Purchase. It is widely believed that the Southern states genuinely did feel threatened by Northern aggression, that a wild North would destroy the Old South. The South felt dominated in the Union by the Northern states, especially since the arrival of a new political party, the Republican Party. The old Whig party split between the 'Conscience Whigs' (who leaned towards the abolitionists) and the 'Cotton Whigs' (who leaned towards the South). This was electorally disastrous for the Union as it gave the Democrats an unmanageable majority. The Democratic Party was also showing signs of breaking into sectional wings. In the North there had risen the new Republican Party, an amalgamation of former Whigs, free-soilers, business leaders who wanted a central government that would protect industry and some Northern Democrats, whose compromise leader was Abraham Lincoln. Lincoln was against the spread of slavery into the new territories but was not an abolitionist, coming from a humble upbringing in Kentucky. The Republican Party was the first political party to come open with a definite antislavery platform, which the Southerners found very threatening. ...read more.

Secession did not inevitably mean war. If the new Lincoln government and the Northern people had been willing to accept secession, the two halves of the former United States might have coexisted in an uneasy peace. But most Northerners, like abolitionists such as John Brown and Henry Ward Beecher, were not willing to tolerate the dismemberment of the United States and were prepared to make war in order to put an immediate end to the degrading institution of slavery. These leaders, through either words or actions, were able to convince the majority that it was necessary to go to war, a and in order to convince them they justified the war with arguments that only indirectly referred to the subject of slavery. Conflicts of interest were present between the farming South and the industrialising North, but issues like tariffs, banks and land grants divided parties and interest groups more than they did North and South. Southern politicians convinced their majority that the North was threatening their way of life and their culture. Northern politicians convinced their majority that the South would seriously damage democratic government if they were allowed to secede. But it was not only about slavery. It was also about the constitutional argument of antebellum Southern culture. Although the majority of Southerners had a little interest in slaves, slavery was the primary interest of Southern politicians and consequently the underlying causes of the South's desire to seek independence and slave rights. In conclusion, both sides can be held responsible for the outbreak of the Civil War. Both sections misunderstood the motives and threats of the other, which held to heightened emotions where there need not be. Underlying everything was slavery, however, slavery was not the only cause of the Civil War, but it was unquestionably the one cause without which the war would not have taken place. ...read more.