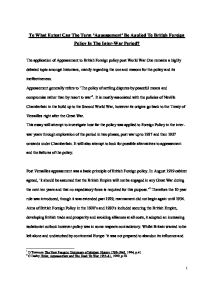 To What Extent Can The Term &amp;#145;Appeasement&amp;#146; Be Applied To British Foreign Policy In The Inter-War Period?

To What Extent Can The Term 'Appeasement' Be Applied To British Foreign Policy In The Inter-War Period? The application of Appeasement to British Foreign policy post World War One remains a highly debated topic amongst historians, mainly regarding the use and reasons for the policy and its ineffectiveness. Appeasement generally refers to 'The policy of settling disputes by peaceful means and compromise rather than by resort to war'1. It is mostly associated with the policies of Neville Chamberlain in the build up to the Second World War, however its origins go back to the Treaty of Versailles right after the Great War. This essay will attempt to investigate how far the policy was applied to Foreign Policy in the inter-war years through exploration of the period in two phases, post war up to 1937 and then 1937 onwards under Chamberlain. It will also attempt to look for possible alternatives to appeasement and the failures of the policy. Post Versailles appeasement was a basic principle of British Foreign policy. In August 1919 cabinet agreed, 'it should be assumed that the British Empire will not be engaged in any Great War during the next ten years and that no expediatory force is required for this purpose.'2 Therefore the 10-year rule was introduced, though it was extended past 1929, rearmament did not begin again until 1934. ...read more.

In secret ministers felt the league was useless but they had to respond to public opinion to support the league. This was particularly disastrous against Mussolini in Abyssinia. Another way in which public opinion shaped actions was with regard to rearmament. Due to the 'never again' mentality there was huge public opposition to rearming, particularly as it may antagonise Hitler. However it is important to note that this could have been mask for the real reasons against rearmament, the idea that Britain was not economically stable enough particularly after the Depression of 1929, Britain simply couldn't afford a huge rearmament programme at the time. One vital reason for Appeasement rather than conflict was due to Britain's global commitments. A Foreign Office memo of 1926 laid out Britain's defence obligations. Britain had obligations as a member of the league, was signatory to the Paris, Washington and Locarno treaties and had commitments in Egypt, Abyssinia, the Middle East, Portugal, the entire Commonwealth and British Empire which consisted of Australia and New Zealand as well as India and Singapore and large areas of Africa and the Caribbean. This was a highly impossible task, Britain did not possess the military or economic strength to defend such a far-flung Empire and when challenged could not assert herself. Appeasement stepped up to a whole new level in the 1930's particularly when Chamberlain came to power in 1937. ...read more.

Another alternative could have been for all out rearmament however this would have had serious economic repercussions. We could argue that it did not really matter what sort of policy Britain adopted as Hitler was so bent on expansion regardless. It is important not to over estimate the policy of appeasement. Darby states that appeasement was 'not peace at any price - it was a policy of accommodation and adjustment but accommodation that did not disturb British interests.'8 Therefore there was only so far Britain was prepared to go in order to negotiate. It was not able to get out of hand. In the 1920's there was never any real negotiation. It was a policy of passive appeasement, Britain just let occurrences happen and pass her by, and it only really became active under Chamberlain. Chamberlain tried to use the policy to its full extent. It should be noted though that at the same time a policy of rearmament was also in place. Appeasement may have been used to quite an extent however it failed to stop the war. But it did provide Britain with one advantage. It brought valuable time and delayed the war. This was vital as Britain was in no way ready for a war earlier on. ...read more.