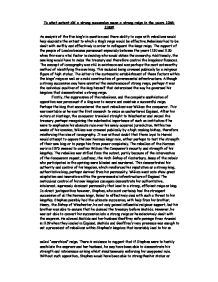 To what extent did a strong succession mean a strong reign in the years 1066-1189?

To what extent did a strong succession mean a strong reign in the years 1066-1189? An analysis of the five king's in question and there ability to cope with rebellions would help elucidate the extent to which a King's reign would be effective. Rebellions had to be dealt with swiftly and effectively in order to safeguard the kings reign. The support of the people of London became paramount especially between the years 1130 and 1135 when this was a vital factor in deciding who would obtain the monarchy. Additionally, the new king would have to seize the treasury and therefore control the kingdoms finances. The concept of iconography was still in existence and was perhaps the most noteworthy method of identifying the new king. This included being crowned publically by a religious figure of high status. The latter is the systematic establishment of these factors within the kings' reign as well as a solid construction of governmental infrastructure. Although a strong succession may have assisted the maintenance of strong reign, perhaps it was the individual qualities of the king himself that determined the way he governed his kingdom that demonstrated a strong reign. Firstly, the suppression of the rebellions, and the complete annihilation of opposition was paramount if a King was to secure and maintain a successful reign. Perhaps the king that encountered the most rebellions was William the conqueror. ...read more.

William I and Henry I were perhaps the most successful rulers in terms of their success with the Church, as they both successfully acknowledged the power and influence of such an institution, seeing fit to heavily involve it within his regime. This was critical as the unwavering support of the church was necessary if they wished to stabilise their regimes in their kingdoms. This is an example of where an embracement of religion led to a strong reign. However, William II's relations with the church can be contrasted to William the Conqueror and Henry I. Rufus' ruthless and avaricious personality alienated and separated divine intervention from his reign. The following succession of Henry I saw an alternation in the relationship between the King and the Church, as he was an effective guardian of the Church, which juxtaposed with the tyrannical features of William II. Deteriorating relations with the church may perhaps be one of the reasons for king Stephen's weak reign. Initially, relations with the Clergy were favourable, as his brother was the Bishop of Winchester and he was formally acknowledged by the Pope who declared his support for Stephen. Consequently, this weakened Matilda's and Geoffrey's claim to the throne, therefore consolidating Stephen's reign. However, later on in his reign Stephens's relations with the Church soured as he offended his brother Henry, as he failed to promote him to the higher and much more prestigious status of the Arch Bishop of Canterbury. ...read more.

By the time he was the monarch, it seems that England was in a state of turmoil. Henry II had to make substantial modifications to English government to ensure that it was running as efficiently as it was under the reign of his grandfather. Such modifications and alterations can be seen in his re-organisation of the Exchequer and the royal finances. He had to organise and demand the co-operation and loyalty from the barons, who experienced unlimited power during the previous king's reign. Through the assizes of Clarendon and Northampton as well as the effective inquest of the sheriffs, Henry II was able to once stabilise the government of England, whilst simultaneously implementing unique an innovative practises of law and order of which the foundations of such mechanisms still exist today. In summary, the evidence suggests that a strong succession did not necessarily symbolise a strong reign. The strength of each king may have been deduced from his personality and his ability to keep other figures of authority content, as well as the ability to maintain a well-organised kingdom and other jurisdictions. Although a strong succession may have had the potential to help establish and maintain a strong reign, what must not be ignored is that in order to successfully and efficiently govern a kingdom, the kings rule must be absolute and he must have the strong, authoritative, dominant personality necessary to achieve such order and stability. ?? ?? ?? ?? ...read more.