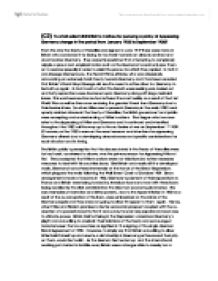 To what extent did Britain's motives for pursuing a policy of Appeasing Germany change in the period from January 1933 to September 1938?

(C2) To what extent did Britain's motives for pursuing a policy of Appeasing Germany change in the period from January 1933 to September 1938? From the day the Treaty of Versailles was signed in June 1919 there were many in Britain who condoned it for being far too harsh towards an already crushed and downtrodden Germany. They correctly predicted that attempting to completely cripple a proud and empirical nation such as the Germans it would only spur them on to recover speedily in order to wield the power for which they aspired. In truth it was George Clemenceau, the French Prime Minister, who was obsessively advocating an extremely harsh Treaty towards Germany and it has been revealed that Britain's David Lloyd George did see the need to rather allow for Germany to be built up again. In fact much of what the French were seeking was carried out and hefty reparations were burdened upon Germany along with large territorial losses. This was because France had suffered the most terribly as a result of the First World War as well as them now enduring the greatest threat from Germany due to their border share. So when Hitler rose to power in Germany in the early 1930's and openly violated clauses in the Treaty of Versailles, the British government and public were accepting and understanding of Hitler's actions. ...read more.

This was enough of a concern not to take Britain to war as long as the threat were relatively minimal however when Hitler made his first bold move in March 1936 and sent his troops into the demilitarized Rhineland the pressure was turned up. The Rhineland was a wealthy part of Germany that they had forced to demilitarize under the Treaty of Versailles and now in 1936 when Hitler had already violated much of the Treaty of Versailles, by rearming and employing an army bigger than 100,000 men, he also walked his troops into the Rhineland. With retrospect as historians we know that Hitler lacked a strong army, which would have been quickly crushed by the Allies, but Hitler took this opportunity to temp his luck and test the Allies resolve towards him. We know he stroke lucky and he was left to do what he wanted as Britain claimed that in fact it was rightfully his and as one Foreign office official put it, "We can't stop Hitler walking into his own backyard." At the time, France's political system was in turmoil and it had a 'caretaker' government which meant that even though they had ground troops they could have committed they were not willing to make an advance on their border with Germany without British support. ...read more.

When faced with the crisis's of the Rhineland and Anchluss although Britain may have been dismayed and un-nerved they were in no position to thwart Hitler using force and hence were trapped into a situation where the only action they could take was to Appease Hitler through diplomacy. Chamberlain himself later admitted that the only achievement of the Munich Conference in September 1938 was to buy Britain another year to rearm. Statistics from the time show us that Germany also rapidly rearmed in that year and that military the Allies together were far superior up to early 1938 and would have speedily defeated the German army. However, at the time they were not convinced about this and only knowing their own military weakness they chose the safer option to not engage in warfare. In the 1920's and most of the 1930's the strong anti war feeling in Britain coupled together the inability to fight meant that Appeasing Germany was always going to be the preferred course of action. Sympathy over the harshness of the Treaty of Versailles was another underlying motive to pursuing the Appeasement of Germany in the period January 1933 through September 1939. These reasons did falter out when Germany became persistently more threatening in the late 1930 years and then more specific reasons such as the fear on entangling Japan and Italy into a war as well as the lack of solid allies for Britain meant that war in Europe only erupted in September 1939. ...read more.