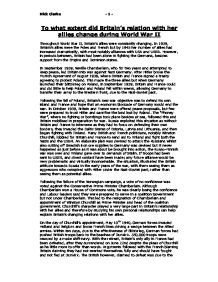 To what extent did Britain's relation with her allies change during World War II Throughout World War II, Britain's allies were constantly changing. In 1939, Britain's allies were the Poles and French but by 1945 her number of allies had increased dramatically, with most notably alliances with USA and USSR. However, in periods between, Britain had been alone in fighting the Germans, besides support from the Empire and Dominion states. In September 1939, Neville Chamberlain, who for two years and attempted to keep peace, led Britain into war against Nazi Germany. After Hitler broke the Munich Agreement of August 1938, where Britain and France signed a treaty agreeing to protect Poland. This made the three allies but when Germany launched their blitzkrieg on Poland, in September 1939, Britain and France could and did little to help Poland and Poland fell within weeks, allowing Germany to transfer their army to the Western front, due to the Nazi-Soviet pact. Following the fall of Poland, Britain's new war objective was to defend its own island and France and hope that an economic blockade of Germany would end the war. In October 1939, Britain and France were offered peace proposals, but few were prepared to trust Hitler and sacrifice the land lost by Poland. The "Phoney War", where no fighting or bombings took place besides at sea, followed this and Britain mobilised in preparation for war. Russia exploited this situation as without Britain and France to intervene as they had to focus on defending their own borders, they invaded the Baltic States of Estonia, Latvia and Lithuania, and then began fighting with Finland. Many British and French politicians, notably Winston Churchill, lobbied for Britain and France to send aid to Finland and fight both the Nazis and the USSR. An elaborate plan was devised to attack the Russians whilst also cutting off Swedish iron ore supplies to Germany was devised but it never happened as just before as it was about be brought into action, the Russo-Finnish war was over and Finland gave over to demands of Stalin. ...read more.

Importantly, in this charter, America committed itself to the "final destruction of the Nazi tyranny." For Churchill, the charter was a success as USA was edging closer towards entering the war with Roosevelt saying he would wage war but not declare it, and sending US troops onto Iceland in preparation. However, this charter was very vague due to the differences of opinion of the "freedoms" of countries, which again shows the conflicts between the two over the British Empire. The British-USSR relationship, however, despite the mutual assistance, did not improve much as it was very much an alliance of convenience. USSR internal and external policies were determined by Stalin's personality, which made relationships between the two countries very strained due to Stalin's relationship with Churchill, who previously had openly despised USSR and Stalin. Churchill had said privately that "If Hitler invaded Hell, I would at least make a favourable reference to the Devil in the House of Commons", which shows how desperate he was for an ally, no matter who it was. It seemed he did not care how the Red Army were faring, but was just pleased that there was a second front, therefore deflecting the weight of the German army away from Britain. Stalin hoped the alliance would benefit USSR with Britain opening a second front and granting him their previous acquisitions between 1939-40, which would contravene with the Atlantic Charter. This was the main cause of friction between the two countries and Britain refused both claims, despite Churchill's desire to launch an attack in Norway or Normandy, upon the advice of its high-ranking Generals. Churchill rejected Russia's claims over the Baltic States declaring that they "were acquired by acts of aggression in shameful collusion with Hitler" and that the transfer of their peoples against their will would be "contrary to all the principles for which we are fighting this war." However, despite this in May 1942, Britain and Russia signed a long-term alliance. ...read more.

The final reduction of influence of Britain came in the late stages of the war. In April 1945, President Roosevelt died and was replaced by his vice-president, Harry Truman. Truman had a much tougher stance on communism and did not have as good as a relationship that Roosevelt and Churchill enjoyed. Truman had little time for the views of Churchill and instead decided to negotiate with Stalin alone especially now that America had the power of the Atom Bomb, which was revealed to Stalin at the Potsdam Conference. In July 1945, a General Election in Britain was called following Victory in Europe, and was won by the Labour party after a lack-lustre campaign fought by Churchill as he was pre-occupied with concerns over the USSR, as he was replaced by Lement Atlee. Due to Churchill's absence, the Potsdam Conference was dominated by the rivalry between Stalin and Truman as they disagreed over Germany's future, reparations and Eastern Europe with Britain having very little say. The war ended with the West concerned over Russia's position in Europe and fearful it would lead to yet another war, while Russia was equally suspicious of the west, especially because of the power they had with the Atomic Bomb. These fears would lead to the Cold War which would last for much of the remainder of the twentieth century. Britain's relationships with her allies were constantly changing throughout the war. Her relationship with France and Poland was ended by the great success of Germany's blitzkrieg tactics, which forced them to look for allies or face the Germans alone. Its relationship with Russia was particularly varied, changing from potential enemies in 1939 to allies in 1942. The reason for this was because of Britain's inability to face a Nazi Europe alone and therefore accepting any alliance, which could be made. Britain's relationship steadier with USA, although their standing with the America declined sharply near the end of the war and they become very much so the weaker ally. Nick Clarke - 1 - ...read more.