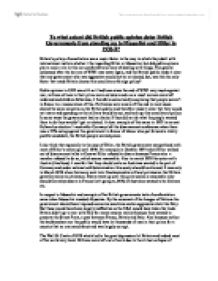 To what extent did British public opinion deter British Governments from standing up to Mussolini and Hitler in 1933-9?

To what extent did British public opinion deter British Governments from standing up to Mussolini and Hitler in 1933-9? Britain's policy of conciliation was a major factor in the way in which they dealt with international matters whether it be regarding Hitler or Mussolini, but did public opinion play a major role in this non confrontational way of dealing with things. The general consensus after the horrors of WW1 was never again, and the British public made it clear that any government who was aggressive would not be re-elected, but, was this the only factor that made Britain choose this conciliatory foreign policy? Public opinion in 1933 was still as it had been since the end of WW1 very much against war, millions of men in their prime were cut down and a as a result women were left widowed and children fatherless, it therefore seems hardly surprising that people weren't in favour in a reoccurrence of this. Politicians were aware of this and in most cases shared the same concerns as the British public and therefore made it clear that they would not rearm and spending on the military would be cut, and took up this conciliatory policy. In some ways the government had no choice if they did not do what the people wanted them to do they wouldn't get re-elected. ...read more.

Many people had no jobs and thus had to way to support their family s they were earning no money so started to claim benefits. Phillip Snowden and Neville Chamberlain both supported the theory of classical economics whereby you try to balance the county's budget. This incurs no borrowing and all of the available capital went to help to rebuild industry, the expenditure would be cut as much as possible and cut taxes to help businesses survive. The effects of the depression were not relieved until 1933 and still many were suffering and therefore the government could not afford to be confrontational as they had no power to back up their threats in the need come, much of the army was dissolved due the economic policy and the defence budget was 1/3 of what it was in 1919. Even if the government did have any spare money it would go toward either helping businesses and giving better welfare to people most badly hit by the depression. There was also a general consensus within Britain that Germany had been hard done by in the past. By the 1930's WW1 was seen by most to be an accident and that it was not really anyone's fault, but Germany was still paying the price due to the treaty of Versailles. ...read more.

Also Britain's army due to the reforms due the depression was very small in comparison to Germany's as money had to be saved. It therefore made sense that the government should try to stall Hitler so that they would have the time and money in order to fight him if the need come. They could not threaten Hitler with war if they didn't have a hope of winning it. In conclusion I think that there was no main reason for the British governments on the 30's not standing up to Benito Mussolini and Adolf Hitler. I believe that it was more of culmination of factors that made the governments concede to conciliation, I believe that untimely they hoped that Hitler would curb his behaviour, and if not they were just biding their time. It is important to remember that the governments didn't know that Hitler always wanted or about his plans for racial purity and world domination, if this was known their action surely would have been swifter. In regards to Mussolini I believe that the Britsh government didn't deem it necessary to go to war over a state of no great importance it would have achieved nothing apart from kill many men. It is undeniable that public opinion played a role solely for that fact that the governments didn't want to dissatisfy the public thought fear of no getting re elected, but not crucial. ...read more.