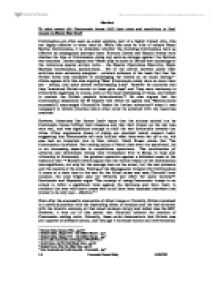 To what extent did Commando forces fulfil their aims and contribute to final victory in World War Two? Commandos are often seen as super soldiers, part of a highly trained elite, who are highly effective in what they do. While this may be true of today's Royal Marine Commandos, it is debatable whether the founding Commandos were as effective as propaganda portrays them. Norman Davies and Ronald Atkins both dismiss the idea of Commandos doing any serious damage against the German war machine. Davies argues that "Great play is made in British war mythology of the numerous special service units - the Special Operations Executive, Royal Marines Commandos, parachutists... Yet in the overall wartime scene their activities were extremely marginal - outward evidence of the basic fact that the British Army was incapable of challenging the enemy on an equal footing."1 Atkins agrees with this idea arguing "Most [Commando raids] were no more than pin - pricks, and some proved embarrassing duds". However he concedes that they "sustained British morale in those grim days" and "they were testimony to Churchill's eagerness to attack, even at the most depressing of times, and helped to sustain the British people's determination."2 He also argues that the Commandos (especially the St Nazaire raid which he agrees was "Spectacularly successful") encouraged Churchill's "desire for further adventure"3 when it was necessary to remain practical about what could be achieved with the resources available. However, historians like James Ladd4 argue that the actions carried out by Commando forces fulfilled their missions and that their impact on the war was very real, and was significant enough to shift the war favourably towards the Allies. Other arguments (many of which are provided below) support Ladd; suggesting that Commandos not only fulfilled what they were set up to do, but also had an important role in final victory. David Fraser states that "the Commandos flourished. ...read more.

The dry dock facility at St Nazaire remained disabled for the rest of the war and was only repaired in 1955. The Commandos killed over 550 and wounded 127. At the same time the Commando force suffered large losses with 168 dead and 214 taken prisoners (this figure includes naval personnel). Although the costs of the operation were high in comparison to most Commando operations, one must remember that there were 5000 German troops garrisoned in the town, up against some 248 Commandos and 300 naval personnel. It was also high in casualty rates due to the significantly larger number of Commandos being used on the raid than on most. They achieved the aim and denied the Tirpitz or any of the large German vessels a safe port on the Atlantic coast. One must also remember the fact that the Germans considered this an invincible port. Indeed, Admiral Donitz when he visited the port only weeks before he asked German sailors what would happen should a British Fleet sail up the channel, and their reply was "it is impossible." Donitz replied "Don't be too sure" 19 and as Mountbatten stated defending the plan "The fact that it was considered impossible made it possible, the Germans never will expect it" 20. The Tirpitz would never break out into the Atlantic and never sank or damaged anything in combat. Radar (Radio Detection and Ranging) was one of the key, high-technology battlegrounds of the war. It secured R.A.F. Fighter Command's narrow victory in the Battle of Britain but the Luftwaffe also used radio navigation aids for blind bombing in the Blitz. In 1941 British bombers began to take the war to the heart of Germany forcing the Luftwaffe to develop its own defensive radars. Britain responded with jamming techniques and a private battle, (the "battle of the beams,") developed between top scientists on both sides to gain the advantage. ...read more.