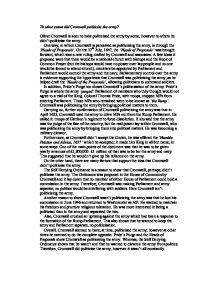 To what extent did Cromwell politicise the army?

To what extent did Cromwell politicise the army? Oliver Cromwell is seen to have politicised the army by some, however to others he didn't politicise the army. One way, in which Cromwell is perceived as politicising the army, is through the 'Heads of Proposals'. On the 17th July, 1647, the 'Heads of Proposals' was brought forward, which was a new ruling drafted by Cromwell and associates. A few ideas it proposed were that there would be a national church with bishops and the Book of Common Prayer (but the bishops would have no power over lay people and no one would be forced to attend church), ministers be appointed by Parliament and Parliament would control the army and the navy. ...read more.

Carrying on, further confirmation of Cromwell politicising the army was that in April 1653, Cromwell used the army to drive MPs out from the Rump Parliament. He called in troops of Harrison's regiment to force dissolution. It showed that the army was the judge of the fate of the country, but the real power lay within Cromwell, who was politicising the army by bringing them into political matters. He was becoming a military dictator. Furthermore, as Cromwell didn't accept the Crown, he was offered the 'Humble Petition and Advice, 1657' which he accepted; it made him King in all but name, in some ways. One of the main points of the document was that he was to be given yearly revenues of �1,300,000: �1 million of that was to be for the army and navy. ...read more.

Here Cromwell isn't politicising the army. Another reason to show Cromwell wasn't politicising the army was that he lost his commission in June 1946 and returned to Westminster as MP. He wanted to maintain his freedom and promote religious toleration. He was more interested in being a politician than in the army and separated the two. Also, Cromwell crushed an uprising against the army which had been a response to the formation of the Rump Parliament. This also shows that he wanted to keep the army and Parliament separate, no politicisation. Overall, Cromwell seemed to have, at time, politicised the army; however at other times he seemed to do the complete opposite. Pride's Purge and the Heads of Proposals show Cromwell as politicising the army. Whereas, the Self Denying Ordinance shows that he wasn't and that he wanted to distance the army from politics. Therefore, Cromwell did politicise the army, however it wasn't all constantly. ?? ?? ?? ?? ...read more.