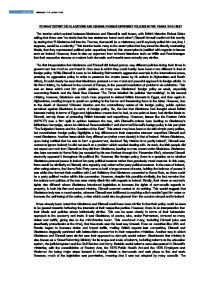 TO WHAT EXTENT DID GLADSTONE AND DISRAELI PURSUE DIFFERENT POLICIES IN THE YEARS 1874-1886?

TO WHAT EXTENT DID GLADSTONE AND DISRAELI PURSUE DIFFERENT POLICIES IN THE YEARS 1874-1886? The tension which existed between Gladstone and Disraeli is well known, with British historian Robert Blake writing that there was "no doubt that the two statesmen hated each other"; Disraeli himself confirmed this enmity by stating that "if Gladstone fell into the Thames, that would be a misfortune; and if anybody pulled him out, that, I suppose, would be a calamity." This tension leads many to the assumption that they stood for directly contrasting ideals, that they represented political polar opposites; indeed, this assumption is justified with regards to issues such as Ireland. However, there is also an argument from eminent historians such as Willis and Feuchtwanger that their respective stances on matters both domestic and imperial were actually very similar. The first interpretation that Gladstone and Disraeli did indeed pursue very different policies during their times in government has much to commend it. One area in which they could hardly have been more different is that of foreign policy. While Disraeli is seen to be following Palmerston's aggressive example in the international arena, pursuing an aggressive policy in order to preserve the empire (seen by his actions in Afghanistan and South Africa), it could clearly be seen that Gladstone pursued a more moral and peaceful approach in foreign affairs. ...read more.

In this case, there would be similarity to Disraeli, who arguably only reformed for party political reasons. In the case of Ireland, after voting reforms, the Home Rule Party came to hold a large amount of seats, holding the balance of power; it was while they formed their coalition with Lord Salisbury that Gladstone converted to Home Rule, so there could be a party political motive within this conversion. However, despite this possible similarity, the fact remains that the actions and policies of the two were utterly dissimilar with regards to Ireland. Finally, their views on women's rights also differed: where Gladstone introduced legislation to increase the rights of women with regards to property, in both his first and second ministry, Disraeli seemed content to do nothing. This would suggest that Gladstone truly was a moral warrior, whereas Disraeli was indifferent to anything which wouldn't get him votes or increase the well-being of the nation, a view which could also be gleaned from the conduct abroad and in Ireland. It has already been noted that Gladstone and Disraeli could have been similar in that their policy could be seen to be geared towards furthering the interests of their respective parties. However, there Is an interpretation that their ideals and policies where intrinsically similar. ...read more.

Disraeli's role as the "Lion of the Congress" at the Treaty of Berlin and his purchase of shares in the Suez Canal in 1875 are clear examples of this, whereas Gladstone intervention in Afghanistan and Egypt exhibited similar ideals. It can thus be seen that, despite the glaring mutual animosity they shared, Gladstone and Disraeli would actually have agreed on various aspects of government, even if they may have done so for different reasons (regarding cynical party politics or frank morality). Gladstone and Disraeli clashed very publicly and very ferociously on foreign policy and Ireland, which has given rise to the interpretation that they were as politically incompatible. However, there were areas of domestic policy which they did not dispute and consistently followed, such as social reform and laissez-faire: indeed, there were few late Victorian politicians who would have disputed either. It may be most prudent to suggest that their differences were based more on style than on substance. Whether they were motivated by morality, expediency, party politics or a combination of all of these, they often followed similar courses of action, often with a common goal. So, despite the popular (and partially justified) interpretation that they were ideological opposites, their policies were frequently similar. The only area in which it could be said that they employed completely different ideological and practical courses of action was Ireland; in all other areas, there was at least some concurrence between the two. ?? ?? ?? ?? ...read more.