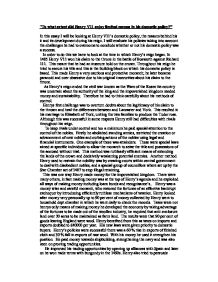 &quot;To what extent did Henry V11 enjoy limited success in his domestic policy?&quot;

"To what extent did Henry V11 enjoy limited success in his domestic policy?" In this essay I will be looking at Henry V11's domestic policy, the reasons behind his it and its development during his reign. I will evaluate his policies taking into account the challenges he had to overcome to conclude whether or not his domestic policy was a success. In order to do this we have to look at the time in which Henry's reign began. In 1485 Henry V11 won his claim to the throne in the battle of Bosworth against Richard 111. This meant that he had an insecure hold on the crown. Throughout his reign he tried to secure his title and this is the building block on which his domestic policy is based. This made Henry a very cautious and protective monarch; he later became paranoid and over obsessive due to his original insecurities about his claim to the throne. As Henry's reign ended the civil war known as the Wars of the Roses the country was uncertain about the authority of the king and the impoverished kingdom needed money and sustainability. Therefore he had to think carefully about his methods of control. Henrys first challenge was to overturn doubts about the legitimacy of his claim to the thrown and heal the differences between and Lancaster and York. ...read more.

Henry's policies were successful there was a 60 % rise in exports of finished cloth and 30 % fall in exports of raw wool. With his money he used it strengthen his position. He paid money towards shipbuilding, strengthening the navy and was also keen on proving trading opportunities. He improved his trading opportunities by opening up alliances with Spain and later on he won trade terms with burgundy in the 1490s. Henry also tried to persuade Burgundy to agree to the Malus Intercursus in 1506 but this was abandoned. Henry managed to commercialise his wool trade successful with France, Spain burgundy and even managed to sell a monopoly of English cloths to Florence in 1490. Although he did not have such success in northern Europe as German towns were unwilling to give up their Baltic trade so Henry was forced to accept that the Hanseatic League had special trading privileges at England's expense. England was increasingly becoming more sustained as Henrys methods of control took their toll. But still Henry was challenged to his claim to the thrown. The challenges were Perkin Warbeck and Lambert Simnel. Perkin Warbeck was a pretender. He appeared from Ireland in 1491; he drew the attention of Yorkist noblemen and invented himself as the duke of York. ...read more.

Within the regional government Henry had different policies depending on his respect and trust for that region. In Wales for example he restored the council and followed the policy of appointing welsh men into it, this was because it was his homeland and it was used as a launch pad for invasion of England in 1485. On the other hand due too their lawless and rebellious behaviour in the North Henry allowed the council to lapse and used the opportunity of the murder of the earl of Northumberland to replace him with the earl of Suffolk, who had little local experience or land in the North but Henry believed him to have the right qualities as he had enough social clan to maintain order but not enough to threaten the crown. In conclusion I think Henry exceeded expectations. He entered the country when there was no sustainability or money and the authority of the king was unsure of. By the end of this reign he had built up a large sum of money using it to strengthen the kingdom, he had developed trade, dealt with any enemy's sufficiently and sustained a good legal system. But he was not as successful in establishing his dynasty. Further he became a very paranoid king and did not often give others any authority which was a major disadvantage in his reign. ...read more.